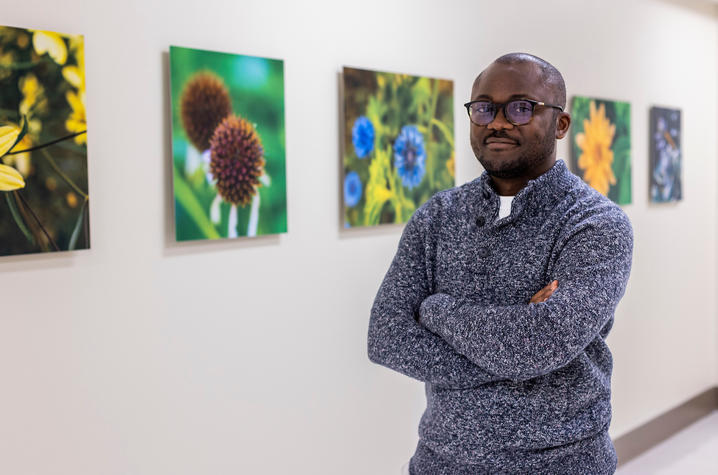 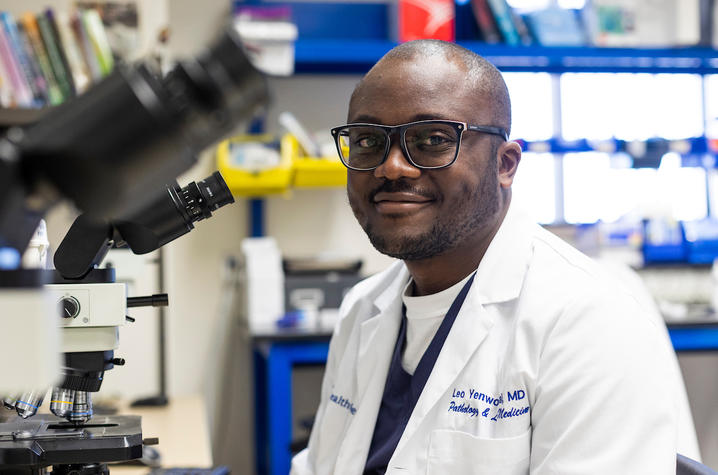 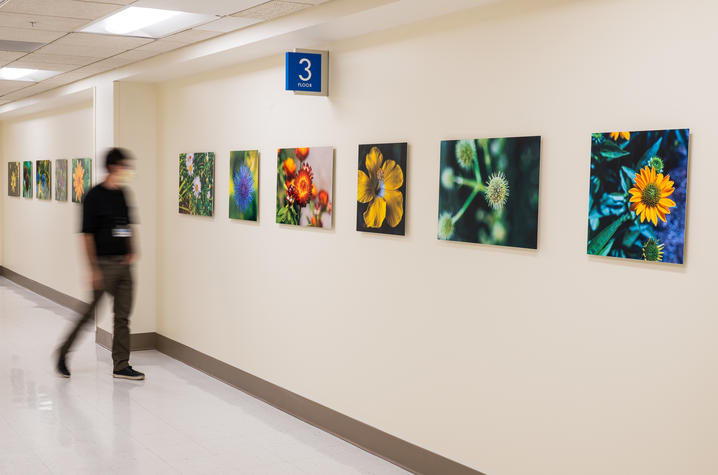 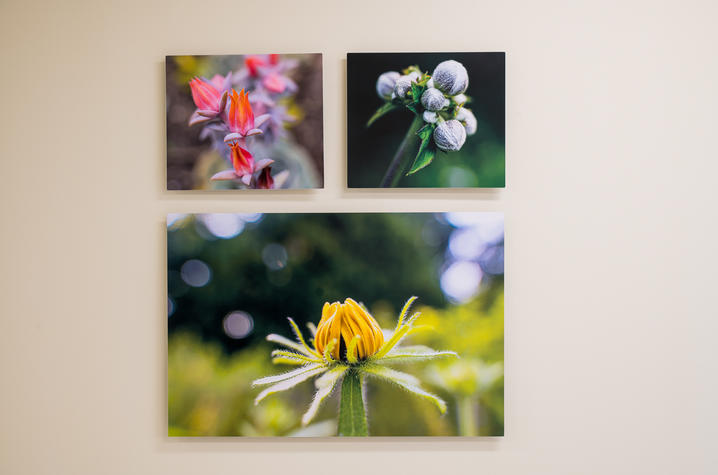 LEXINGTON, Ky. (Nov. 21, 2022) — When UK HealthCare pathology resident Leonard Yenwongfai, M.D., was a young boy, he asked his father what motivated him to work as a police detective.

His father answered with four simple words: "Never stop being curious." Yenwongfai, who goes by “Leo,” has used those four words as the distinct inspiration and motivation for a career in medicine, which he dreamt of his whole life.

Yenwongfai completed an undergraduate degree in biochemistry at the University of Buea in his home country of Cameroon before immigrating to the United States in 2009. As he grew up, he realized that he has an affinity for detail — a trait that inspired him to specialize in pathology in his final year of medical school at the University of Kentucky College of Medicine.

“I never considered pathology until my last year of medical school, when I got some exposure as to what pathologists actually do,” Leo said. “And, because I am so detail-oriented, I felt like pathology was the one path in medicine where I could really exploit my skill of attention to detail for something good.”

Pathology, or the study of disease, felt like the perfect fit for Yenwongfai as he learned to investigate anatomic tissue in the lab, looking at the smallest of cells through a microscope. While pathologists seldom interact with patients daily, they impact nearly every level of patient care, from diagnosing diseases like cancer to helping manage other chronic diseases through laboratory testing.

Yenwongfai, who became the first medical doctor in his family, said that being a first-generation international student in medical school brought its challenges. He made it a priority to focus on church, family and finding hobbies to engage with that would help him through the most challenging times.

In 2013, while still in school, Leo and his wife Anita had their first child. Keeping his now-late father’s words of wisdom close to his heart, Leo’s innate curiosity — and his new daughter — inspired him to learn a new skill outside of the lab.

“When we had our daughter, I thought it was always cool when people post photos of their kids from multiple years to show how much they’ve grown,” Leo said. “So, I felt like I needed some way of documenting the growth of my daughter, too — and that’s when I began learning photography.”

Leo, despite never studying art or photography a day in his life, began teaching himself photography skills over time by following tutorials online. But once he entered pathology, he said, his interest in photography became more than just a hobby.

“I stayed at home with my daughter for her first year, and I took so many pictures of her,” Leo said. “That’s when my initial interest in photography began. But, when I got into pathology, everything changed. I realized, in pathology, so much of what we do is documenting tissue and cells through photographs — documenting things that people can’t see with the bare eye.”

What Leo loved about pathology, investigating small details, came to be what he loves about photography as well. Leo’s photography brings out complex patterns with a pathologist’s eye for detail.

“Taking a lot of photos in pathology really forced me to not only delve more into the specialty itself, but it also forced me to begin seeing the details and patterns in the world around me with my camera,” Leo said. “And so that’s how I really started taking the kinds of photos I take. I like to take photos of something that might be ‘regular’ or ‘mundane’ to the normal person and pull out the complex features of it with my camera and composition.”

Leo began investigating the world around him and beyond with his camera — he even started taking photos of the moon and stars. But when a close friend from his church community became sick, he found himself with a new motivation to take photos.

“A friend of mine, Sandra Marlowe, who sang in our church choir with my wife, began having difficulty swallowing, speaking and would choke when she ate food,” Leo said. “She saw doctors at UK, and after two months of various testing, the physicians diagnosed her with Bulbar ALS.”

Amyotrophic lateral sclerosis, also known as ALS or Lou Gehrig’s disease, is a fatal, progressive disease of the nervous system which causes a severe loss of muscle control. According to the ALS Association, two of every 100,000 people will receive a new ALS diagnosis each year. Marlowe was diagnosed by Edward J. Kasarskis, M.D., Ph.D., ALS specialist with the Kentucky Neuroscience Institute and professor of neurology at the University of Kentucky College of Medicine.

Specifically, Bulbar ALS occurs in only 25% of ALS diagnoses — resulting in the onset of symptoms like weakness in the face muscles, speech issues and difficulty swallowing, whereas the other 75% of ALS patients see an effect on the muscles in their limbs first. People with Bulbar ALS have a shorter lifespan than those with a regular ALS diagnosis because the person’s speech, respiration, nutrition and hydration are compromised more quickly.

“Unfortunately, Sandra’s health began declining very quickly,” Leo said. “It was just very hard to see. In the summer of last year, what struck me the most, was when she posted on Facebook how she missed spending time outdoors — which was something she loved a lot prior to her diagnosis.”

He felt like if there was one thing he could do for Marlowe, it would be to begin taking photos of flowers, and sending them to her, so she could continue feeling a connection with nature from inside the walls of her home. And that is exactly what he did, all summer long.

“In my free time I would go out, take photos of pollination and flowers, and just share them with her,” Leo said. “She just really loved it, and I began to love it too, it became therapeutic for me. She really influenced me to do this kind of photography, and I just wanted to give her the opportunity to still have a connection with nature and experience the outdoors without necessarily stepping outside. That’s why I did it, and it helped her.”

When Leo’s colleagues saw his photography, they were impressed and encouraged him to reach out to the team at UK Arts in HealthCare — the group that installs art across the UK hospitals and clinics. Studies show that consuming and appreciating artwork can enhance the spiritual, emotional and physical well-being of everyone including patients, visitors and even health care workers. The artwork installed throughout UK HealthCare is a crucial factor in the holistic care UK provides.

“I figured if my photos could help my friend Sandra stay positive and connected to nature while battling ALS, that it could help the patients at UK, too,” Leo said. “So now, a collection of my work is displayed in the Kentucky Clinic — hopefully to spread joy, and help with the healing process, with some of the patients that come and visit UK.”

His collection, titled “Patterns and Pollinators,” displays a myriad of different flowers and insects. His photographs document the complex patterns of nature with a curious and scientific attention to the minute details which mirror the structures of our world, including the kinds of tissues and cells he investigates as a pathology resident. The collection is located at the Arts in HealthCare North Gallery on the third floor of the Kentucky Clinic.

“For me, I really do use photography as an avenue for stress relief,” Leo said. “Times when I’m super stressed, I just go out and sit to take in the world around me. Nothing is random, every photograph I take is with intention after interacting with my environment and exploring the details of what I see.”

Today, Leo’s family is still in close touch with Marlowe. He says that watching her experience the challenges of ALS not only inspired him to delve into this new type of photography, but it drives him through his pathology residency program every single day.

“Becoming a pathologist will be a dream come true for me,” Leo said. “Knowing that there are many diseases without a definitive cure, such as ALS or cancer, only fuels my desire to pursue learning more about these diseases. Regardless, we must remember that caring for a patient requires a holistic approach for their well-being. This is why I was driven to take those photos for Sandra, and little did I know, I would be delving into a whole new world of botanical photography, now with my own exhibition on display to help others.”

The UK Arts in HealthCare program displays more than 2,100 works of art featuring local, regional, and international artists in the lobbies, waiting areas, hallways, outdoor spaces and exam rooms across UK HealthCare facilities. Seven rotating galleries feature as many as 11 unique visual art exhibits per year, including employee artwork, such as Leo’s.

In all, Leo has one message that he wants to express with his collection of art.

“Ultimately, all I want to pass on to people with my work — whether that is with my photographic art or with pathology — is to slow down and look at the world around you, it can be so soothing,” Leo said. “Look for the interesting and unique details you may have never noticed before that exist within the ‘mundane’ or ‘ordinary,’ and never, ever stop being curious.”