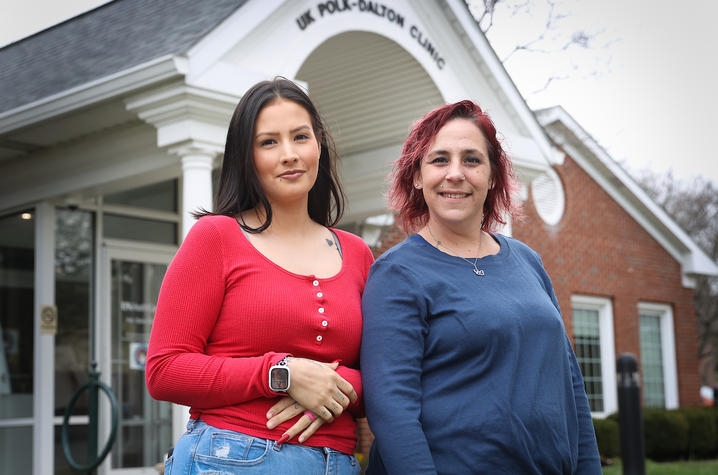 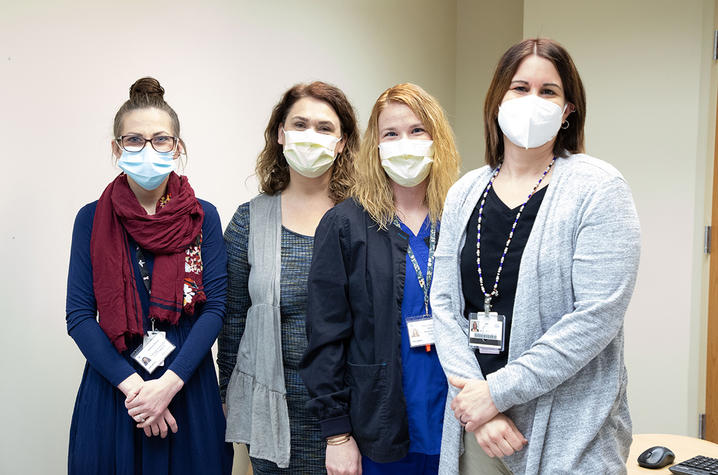 LEXINGTON, Ky. (April 12, 2022) — For expectant mothers, the top priority is to do everything in their power to ensure their baby arrives healthy. For some women, this task is harder than it sounds. In Kentucky, 20 out of every 1,000 babies are born to a mother who is using opioids — the third-highest rate in the country.

Two women who have been through this experience are Ashlee Vogelsang and Gabi Espinosa. Both mothers underwent treatment within UK HealthCare’s Perinatal Assistance and Treatment Home (PATHways) program, housed within UK HealthCare’s Polk-Dalton Clinic. This program is designed to help pregnant people who are living with substance use disorders.

Ashlee lived with opioid use disorder (OUD) for 13 years. The final time she got in trouble with the law for using drugs was also the moment she found out she was pregnant. She was given no other choice but to seek treatment at The Chrysalis House and enter PATHways for prenatal care — a program that helped save her life.

Ashlee was first put into PATHways for their traditional treatment clinic but then was referred to their Birth and Recovery Integrating Group Holistic Treatment (BRIGHT) program for some additional support. The BRIGHT program is a woman-centered group treatment program led by a midwife, which meets every Friday for treatment and counseling with a therapist, nursing support and peer support staff.

Her first moments going into the BRIGHT program were filled with fear and anxiety for what was to come. But that soon faded away when she realized that she did not have to go through it by herself – a whole staff, support group and midwife were there to help her.

Studies show that being surrounded by a support system of other expecting mothers and a midwife for woman-centered care can make a world of a difference. In fact, midwifery care has been shown to decrease intervention when in labor, improve patient satisfaction and reduce preterm labor rates.

And while Ashlee entered the program the first time with no choice, when she found out she was pregnant again while in recovery, she instantly knew that she wanted to re-enter the PATHways BRIGHT program — this time, on her own terms.

“I came back willingly for my second pregnancy in recovery because I know how much I gained the first time,” Ashlee said. “I was excited to be there because I knew there would be girls like my friend Gabi that were new to this, and I’d be able to help them through the process because I had already been through this once.”

Today, because of her hard work, dedication and the support she received through PATHways, Ashlee is a stay-at-home mom, homeschooling her two teenage children and caring for her two little ones, all while furthering her own education at the University of Kentucky.

“I wouldn’t be where I am today, almost four years sober, if it wasn’t for the PATHways group believing in me every step of the way,” said Ashlee. “I lived with these people. We all came in different parts, but we came as one person. We all were there for the same end goal. They’re like sisters now.”

And in the future, she would not hesitate to go back again, as she attributes much of her success to the women that helped her through both pregnancies.

“I just love the women at PATHways,” said Ashlee. “And I promise, when I do find myself ready to have another baby, PATHways is where you will find me.”

Gabi and her fiancé dreamed of having a family together but first wanted to seek treatment and stability. They started on the right track, found themselves in a better home and began treatment on Suboxone, one of three effective medications used to treat opioid use disorder. But when Gabi found out they were expecting, she knew that she wanted some additional support to help her through the pregnancy. That is how she found PATHways and the BRIGHT program.

One of the best things about the BRIGHT program for Gabi is the sense of security it gave her during her pregnancy.

“Going into the BRIGHT program, I was able to see certain people all the time and it stayed consistent. Having to see a whole bunch of different people and doctors can be nerve-wracking, and I don’t feel like that’s very good when you’re in recovery,” Gabi said. “It gives you that trust and lessens your uncertainty because you’re next to women who are all going through the same thing.”

This remains true for pregnant women. Helping patients have continual access to their medication throughout pregnancy and beyond is one of the key elements to the program’s success. To date, there have been no overdose deaths in women who are active in the program and using medication.

In the BRIGHT program, the use of a midwife to provide woman-centered care can also help with another hurdle: overcoming the stigma that pregnant women with substance use disorders face with mislabeling and misinformation about them as people, and as mothers.

“I was always worried about how people would see you being in recovery or being on Suboxone while you’re pregnant,” Gabi said. “But I had all of them to support me, and people don’t look at you the way you think they might. You’re doing what you’re supposed to do for the sake of your child, and you’re a person just like everyone else.”

And like Ashlee, Gabi found the group environment BRIGHT provides to be very helpful in overcoming some of her greatest fears during pregnancy.

“I was terrified about how it would go at the hospital. But I wasn’t as terrified when I got to the program, because all the other girls were there with me and I was able to see them have their babies and everything was completely fine,” said Gabi. “That’s what helped put my mind at ease.”

Their partnership between the University of Kentucky, the UK College of Nursing, UK HealthCare and the Kentucky Cabinet for Health and Family Services has helped provide treatment to hundreds of other mothers like Ashlee and Gabi.

For Gabi, she has looked up to many of the other strong mothers in her program. Seeing them have success and overcome struggles helped her through the most challenging times she faced, and now she hopes to be an inspiration to others as well.

“Now, my fiancé and I are in a beautiful two-bedroom apartment with our baby girl, and we look forward to expanding our family,” Gabi said. “It’s crazy to see how far you’ve come. I know someone is probably looking up to me and it’s hard to believe that sometimes. If I could say one thing to the other women entering the clinic, I would say never give up, and never feel like you’re alone. There are so many people here to back you up. You can do this.”

If you or someone you know is pregnant and dealing with substance use disorder, contact the Polk-Dalton Clinic at (859) 218-6165 to make an appointment for prenatal care.