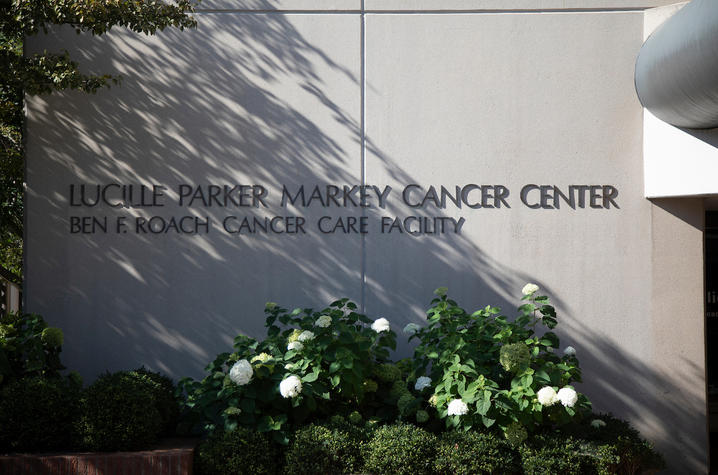 A new study led by Markey researchers shows the anti-leukemic drug nilotinib may be repurposed to overcome therapy resistance in metastatic melanoma.

LEXINGTON, Ky. (Oct. 29, 2020) – A new study led by researchers at the University of Kentucky Markey Cancer Center and UK Department of Pharmacology and Nutritional Sciences demonstrates the potential benefit of using an anti-leukemic drug nilotinib – most commonly used to treat chronic myelogenous leukemia – to overcome therapy resistance in metastatic melanoma.

In the study, published in Nature Communications, the researchers used cell culture and animal models to demonstrate that nilotinib, an ABL kinase inhibitor, may provide benefit for patients with metastatic melanoma who have developed resistance to the current standard-of-care drug regimens.

Melanoma is an extremely deadly form of skin cancer once it has metastasized (spread) to other organ sites. Immunotherapy can be curative for some patients; however, only a fraction respond to this treatment.

Some patients with melanomas have a mutation in a gene called BRAF and can be treated with a BRAF/MEK inhibitor cocktail, which inhibits the pathway activated by BRAF (BRAF->MEK->ERK) that is critical for melanoma cells to grow and survive. BRAF/MEK inhibitors initially work well for most people and cause their tumors to shrink.

However, for the vast majority of patients, these drugs stop working after about a year. Patients who do not respond to immunotherapy or who develop resistance to BRAF/MEK inhibitors have few additional treatment options and rapidly succumb to their disease.

“It is very important to find out how metastatic melanomas develop resistance so that we can design new therapeutics to prevent or reverse the resistance,” said Rina Plattner, Ph.D., professor in the UK College of Medicine.

Her group, led by Rakshamani Tripathi, Ph.D., identified a novel mechanism to explain why some patients develop resistance to BRAF/MEK inhibitors. The Markey researchers showed that ABL tyrosine kinases, most known for their involvement in promoting the development of human leukemia, cause reactivation of MEK/ERK in the presence of BRAF/MEK inhibitors, by activating a protein called MAP3K1.

Moreover, the researchers also showed that an FDA-approved drug that inhibits ABL kinases, which has been used for more than a decade to treat ABL-driven leukemias (nilotinib), dramatically re-sensitizes melanomas to BRAF/MEK inhibitors, causing prolonged shrinkage of resistant melanomas in mice. The group also showed that if mice are given nilotinib along with BRAF/MEK inhibitors at the beginning of treatment, resistance can be dramatically prevented from developing in the first place.

“It is rare that a basic science researcher is fortunate enough to see their findings translated to the clinic in their lifetime,” Plattner said. “Our hope is that this research changes clinical practice and increases the 5-year survival rate for some patients with metastatic disease.”

This work was funded by the National Cancer Institute, Lloyd Charitable Trust, and the Markey Cancer Center.