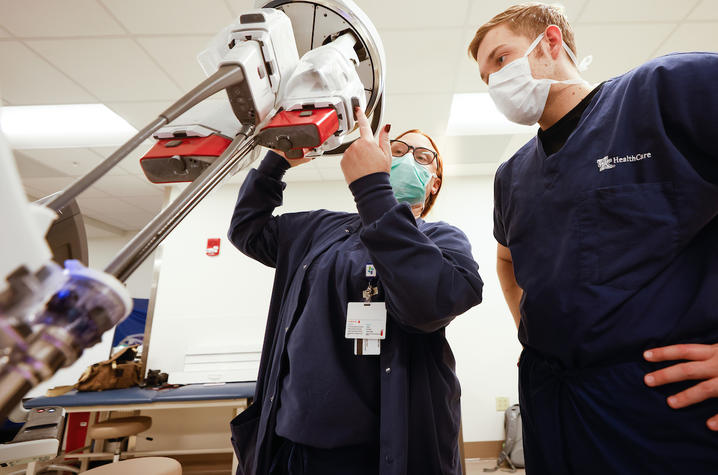 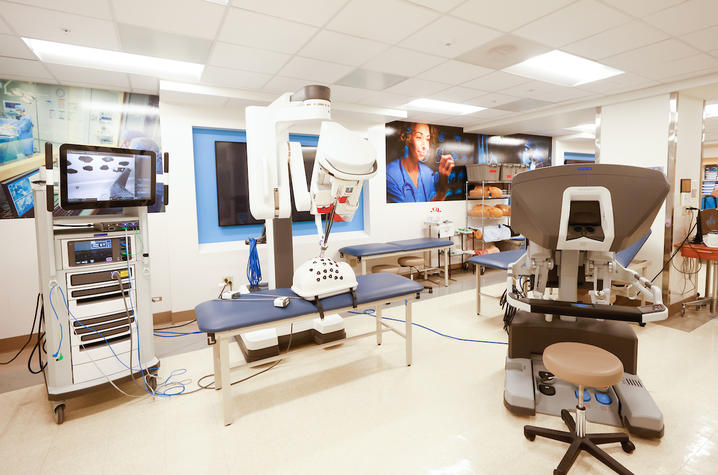 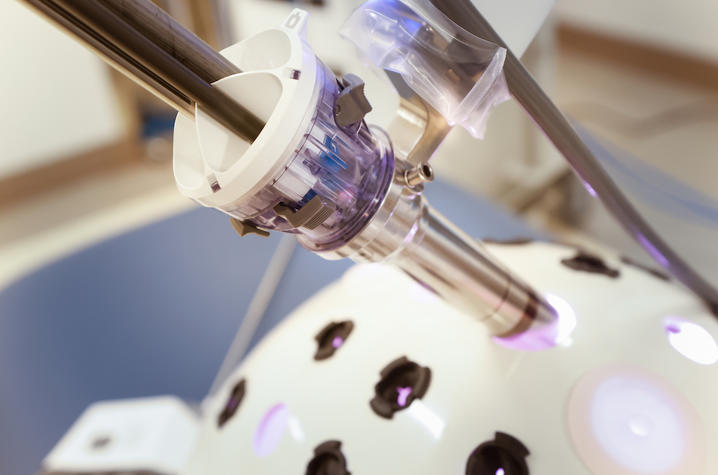 LEXINGTON, Ky. (March 17, 2022) ­– When J.R. Bell, M.D., an assistant professor of urology at the University of Kentucky College of Medicine, describes the da Vinci SP Surgical System, you get the sense that this is the pinnacle of surgical technology. This machine, with its single arm, gives surgeons the ability to perform complex surgical procedures through a single, inch-long incision.

Robotic surgery is nothing new, but this machine is. When people hear “robot surgery,” they may conjure images of robots in a factory, performing complex tasks without any human intervention. But robotic systems are tools, used the same way a surgeon would use a scalpel. The da Vinci SP is a recent acquisition by UK HealthCare for urological and oropharyngeal surgical procedures and is the only such machine in Kentucky. According to Bell, an expert in minimally invasive urological surgery, using a robot for surgery is has shown to have improved patient outcomes with less pain and reduced risk of complications compared to traditional surgery.

“For patients, the advantages are fewer incisions, less post-operative pain and hopefully a shorter recovery time,” Bell said. “There is a reduced risk of complications, and patients can recover faster.”

As an example, Bell described prostate surgery using the SP for men with benign prostatic hyperplasia (BPH). The SP stands for “single port,” meaning the robot has a single arm that contains the camera and the surgical instruments that require only one, thee-centimeter incision. Previous iterations have multiple arms, which would require multiple incisions.

“With this machine, we can go directly through the bladder to carve out the prostate,” Bell said. “Before we would have to go through the abdomen. This way we don’t have to worry about moving intestines out of the way and risk injuring them. It really mitigates potential complications.”

The direct access point allows the single arm to have multiple orientations so surgeons can have different vantages of the surgical site.

“The camera is really flexible,” Bell said. “So if you need a vantage of 12 degrees or 30 degrees, you can change that in real time and get angles that are not possible with the current instrumentation.”

Patients aren’t the only ones who stand to benefit from being at a hospital with this kind of technology. Medical students and residents have the opportunity to gain skills and experience not offered by many institutions.

“It’s a fairly small percentage of overall places that have this,” Bell said. “Urology residency is five years, and you have to start that process a year or two before you even start your residency. So, they’re looking at programs they want to go to at least six years before they graduate. By looking at programs that have this technology ­– where they can get this experience during their residency – they don’t have to spend a year in a post-residency fellowship getting this training. They can go directly to practice.”

“It will be a great resource for education and training,” said Vince DiCarlo, M.D., a resident in the Department of Urology. “For future graduating residents who get comfortable with the system it could be a very marketable aspect of their training when searching for their first jobs.”

Training on a robot like the da Vinci SP is valuable but intense. Students and residents start first on a simulator, doing basic technical exercises that look almost like video games. The goal is to first understand what the tools do and how to move them. Displayed on a screen near the simulator are three cones, one of which has a ring. Concentrating on the controls, a user moves the ring from one cone to another, slowly mastering how to move the robot’s arms. The exercises increase in complexity – spinning the camera, moving the instruments, and doing multiple things simultaneously.

“There is definitely a learning curve with 'docking' the robot for use, as well as intraoperative mobility,” said Nick Friedberg, M.D., fellow in the robotic surgery program. “But the continuity across da Vinci systems with respect to the surgical console allows surgeons to utilize prior robotic surgical experience even with this innovative new tool.”

“Then they will progress to simulating different surgeries,” said Bell. “For instance, in a hysterectomy, they will identify relevant anatomy in a simulator. Then I’ll have them point to where they would make the incision. From there, after they’ve “cut” that part out, they would demonstrate how to sew the two pieces of anatomy back together. It walks them through every part of the procedure and different levels of complexity until they have enough skill and understanding to begin to engage in patient care under the supervision of an attending surgeon.

“I think that the amount of robotic experience is a big draw for any program and something applicants frequently ask about," said Rohail Rashid Kazi, M.D., resident in the Department of Urology. “Urology, like many other surgical specialties, is a field that is always evolving and it's important for any training program to keep up with how our practice changes.”