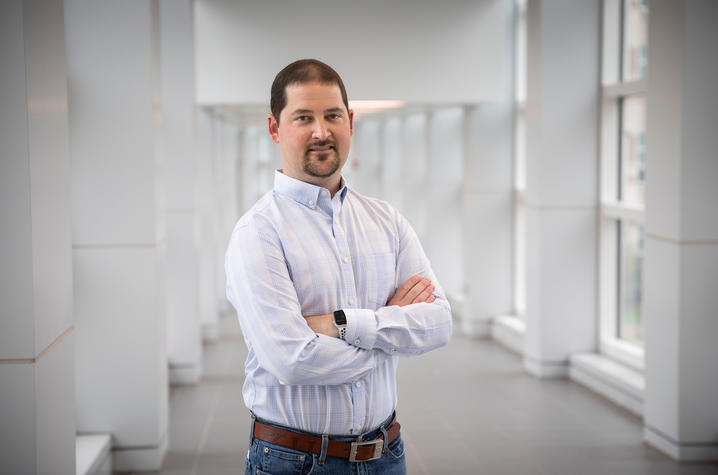 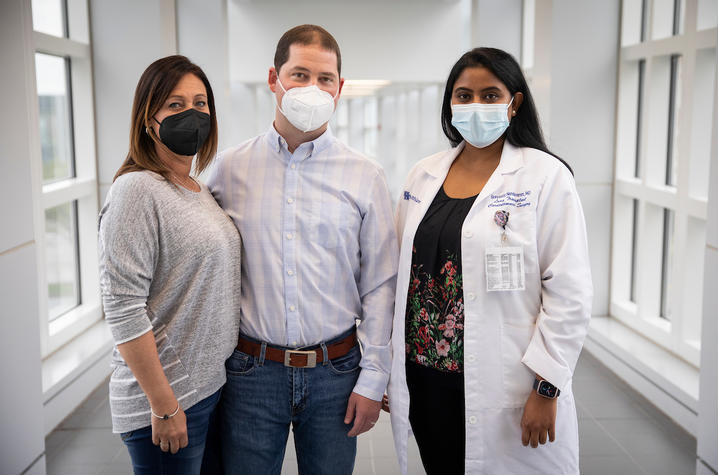 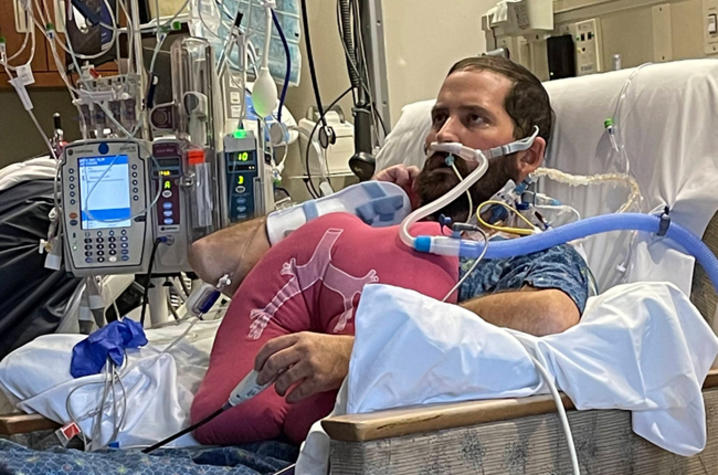 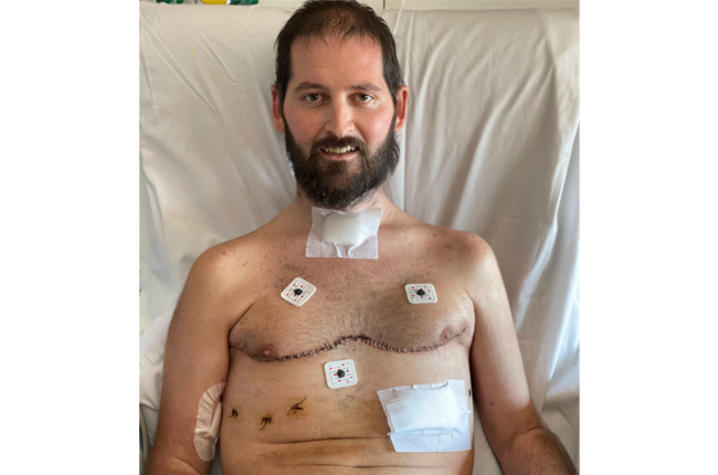 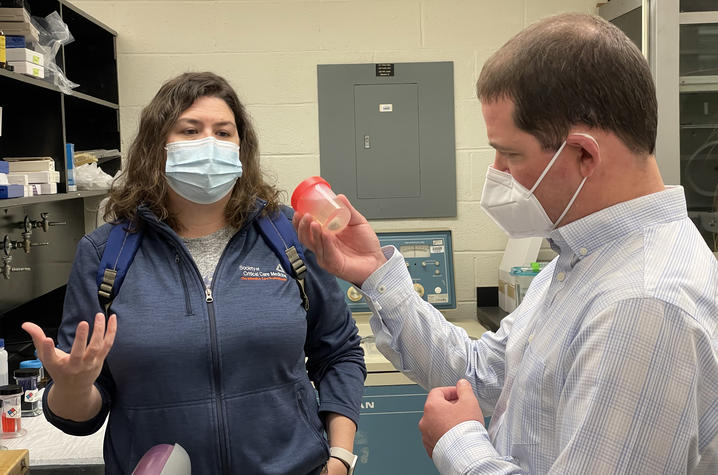 That’s what Andy Wilkins and his wife Michelle were told after Andy was hospitalized with COVID-19.

After testing positive on Aug. 1, 2021, Andy felt himself go downhill fast. He and Michelle were on a getaway with some friends when he started to feel unwell. He contacted his hometown primary care doctor in Elizabethtown, Kentucky, who advised him to be tested for the coronavirus.

“I started out with shortness of breath, and my oxygen levels were dropping into the eighties,” Andy recalled. “It seemed as if there was no time after receiving my positive test result that I was heading to the hospital.  It all happened so fast.”

Over the next few days, Andy made two trips to the emergency room. He was admitted to the hospital in Elizabethtown on Aug. 6. By Aug. 26, he was at Norton Hospital in Louisville, on a ventilator and extracorporeal membrane oxygenation (ECMO), a heart-lung machine that pumps oxygenated blood into the body. It allows the lungs to rest while removing carbon dioxide and sending oxygen-filled blood back to the body which helps improve oxygenation to the tissues. It is used as a last resort for patients with severe respiratory failure due to COVID-19; some patients on ECMO stay on it long enough for their lungs to recover. However, others, like Andy, are unable to recover due to extensive fibrosis, and ECMO is used to sustain them as a bridge while they are evaluated and considered for lung transplant.

Andy recalls that the conversation about a double lung transplant started early in his hospital stay. His pulmonologist at Norton, Sonia Compton, M.D., told him that a transplant was his only option.

“Once I got hit with that, it just scared me to death,” Andy said. “You don’t know what to expect out of it. All of those 'what-if' scenarios started playing in my mind.”

On the ventilator, Andy was unable to ask Compton any of the thousands of questions going through his mind. So, he typed them out on his iPad.

“What are the chances of getting to a place of living a long and healthy life as if nothing had happened,” he wrote. “What are the potential complications? Without sugar coating things, what is my best possible outcome? What’s the timeline?”

But Andy’s main concern was for his wife and his daughters, at the time, age 15 and 7.

“I just want to get home as quick as I possibly can,” Andy wrote to Compton. “You don’t realize how many things you take for granted in life until something like this hits you like a brick wall. I just don’t know what else to say other than I want to get home. I miss my girls like crazy.”

Once Andy and Michelle made the decision to proceed with the double lung transplant, he was transferred to UK HealthCare’s Chandler Hospital under the care of Sravanthi Nandavaram, MD, medical director of the UK Transplant Center Lung Transplantation Program.

On Oct. 19, Andy underwent the double lung transplant surgery by Suresh Keshavamurthy, M.D., surgical director of the Lung Transplantation Program. It was a long and technically challenging surgery, during which the ECMO and the tracheostomy were removed. Twelve hours after his surgery, he was taken off the ventilator and was left with just a nose cannula for supplemental oxygen. Andy took his first breath with his new lungs.

“I never in my life dealt with anxiety,” Andy said. “But anxiety kind of grabbed hold of me and it took a lot of assurances from Dr. Nandavaram and the staff. They said, hey, you have these brand-new lungs and they’re working. You have to trust them. But I didn’t at first. It was something that I didn’t know how to trust, or how to rely on.”

“It was a pretty incredible feeling,” Andy continued. “Once it dawned on me that I could breathe, the feeling is kind of overwhelming. It comes over you, as if to say, we’re doing it, we’re on our own. It’s pretty incredible.”

On Nov. 5, 2021, after spending four months in three hospitals, Andy went home. While his wife Michelle was with him throughout his stay and his older daughter was able to visit just a couple of times, Andy hadn’t seen his 7-year-old daughter in over three months.

“That was the hardest part,” Andy said. “We thought it would be too much for our youngest to see me like that. Throughout the whole thing, not seeing the kids was the absolute toughest part.”

Seven months after his transplant, Andy is back at work full time. He runs a home building company, and the work waits for no one.

“Dr. (Michael) Anstead told me at my check-up, don’t worry about getting back to work so soon, you need to be taking it easy. But I like to stay busy and sitting around doesn’t get it done for us. So, I was back to work full time about six weeks after the transplant.”

Andy credits Anstead, Nandavaram, Keshavamurthy and his whole care team, including Lung Transplant advanced practice registered nurses, the lung transplant coordinators and his team of physical therapists for his quick and remarkable recovery. He continues to see his care team for monthly follow-up appointments.

“Dr. Nandavaram is just outstanding,” he said. “You can see her heart touch on things and how much everyone there respects her and follows her. Dr. Nandavaram’s leadership skills are second to none. You can see that shine through with all her staff. You’re not just a name on a piece of paper. It’s personal to her. Her personal dedication to her patients is absolutely amazing.”

While in Lexington for routine follow-up exams, Andy had a chance to visit the Kentucky Research Alliance for Lung Disease, where donated diseased lung tissue is stored. Andy donated his old lungs to the biobank where researcher Jamie Sturgill, Ph.D., studies lungs donated by lung transplant patients. There, floating in preservation fluid in a specimen cup, is a small piece of Andy’s lung. He holds it at eye level as Sturgill explains the degree of scarring in his lung. No matter how much oxygen they pumped into him, Sturgill said, there was no way it could go through his lungs and to the rest of his body. There was simply too much damage.

The visual impact is powerful, both for Andy and Michelle. There truly was no other choice but transplant.

April is National Donate Life Month, a monthlong celebration to raise awareness about donation, encourage Americans to register as organ, eye and tissue donors and honor those that have saved lives through the gift of donation. Andy has been on the registry for years, but he never really thought about what it meant to be an organ donor until his experience.

“I signed myself up years ago and never thought twice about it,” he said. “But going through this, it puts it in a whole new light.”

So, what would he say to someone who is thinking about joining the registry?

“You can give the gift of life to so many people,” he said. “The end of one life doesn’t have to be the end. There’s so much good that can come from being a donor. So many lives saved, so many second chances given. What do you have to lose?”

More than 1,000 Kentucky residents are waiting to receive lifesaving hearts, livers, lungs, kidneys and other organs. Organ donors offer recipients a second chance at life, but the need for donations is much greater than the number available. Visit www.registermeky.org for more information and to register.

The COVID-19 vaccine is safe, free and widely available. Visit www.vaccines.gov/search or text your zip code to GETVAX — 438829 — to find vaccine locations near you.