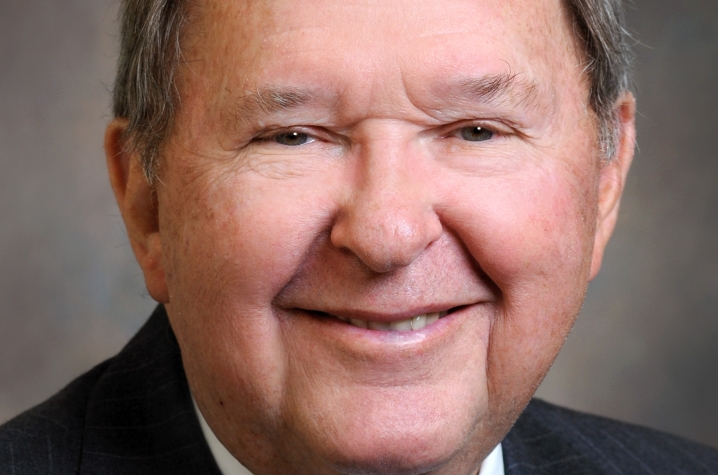 “Bill Gatton’s unwavering support for the University of Kentucky has had a profound impact on the students, faculty and staff on campus, and on higher education in the Commonwealth," Capilouto said at a news conference announcing the gift in the UK Student Center's Frank H. Harris Grand Ballroom. "Through his unprecedented, inspiring and enduring support, and his invaluable service on the UK Board of Trustees, Bill is helping us meet the challenges we face today so that we can move the University of Kentucky boldly forward into the future.”

The new Student Center — a $175 million, self-financed renovation and expansion scheduled to open in 2017 — was authorized by the Kentucky legislature during its 2014 session. It is part of more than $1 billion in campus transformation projects being self-financed by the university.

The Student Center was originally constructed in 1938 and expanded in 1963 and 1982. A central facility to the university community, it hosts nearly 2 million visitors annually.

The new Student Center will include state-of-the-art student activity and study spaces, dining and retail operations; parking; a bookstore; a health, fitness and recreation center; and other amenities that support student success. It will also serve as the new home for the UK Visitor Center upon its completion.

The new Student Center will be designed to serve the entire campus by providing shared space for student, faculty, staff and community engagement. Groundbreaking is scheduled for June 2015, with completion anticipated in 2017.

"When Bill Gatton stepped forward 19 years ago with his original record-breaking gift, it set the university on a totally new path," said Mike Richey, UK's vice president for development. "It demonstrated how private philanthropy can elevate a public university to a higher level of excellence.”

Gatton’s total philanthropy to UK is now more than $45 million, and his total gift impact upon the university is nearly $57 million, with some of his gifts having been matched by the state’s “Bucks for Brains” program. He is the single largest donor in UK's history.

The iconic 21st century Student Center will be located near the corner of South Limestone and the Avenue of Champions, and will be designed to present a new front door to campus. The facility will retain the historic 1938 original Student Center building with its Frank H. Harris Grand Ballroom, and the 1924 Alumni Gymnasium will be incorporated into the new construction.

Dozens of student organizations will occupy office space in the new facility, making it a center for student volunteerism and philanthropy, the focus of many campus organizations. The current Student Center has nearly 2 million visitors annually.

Gatton is a native of Bremen, Kentucky, and the son of Harry William Gatton Sr., and Edith Martin Gatton. In 1954, he received a bachelor’s degree from the University of Kentucky College of Commerce, the original name of UK’s Gatton College of Business and Economics. After a stint in the U.S. Army, he earned an MBA degree at the Wharton School of the University of Pennsylvania, where he majored in finance and banking.

Gatton is a lifelong entrepreneur. At an early age, he marketed packaged garden seeds door to door for his elementary school, outselling all the other students combined. Later, he sold watermelons he grew on his family’s farm by the truckload to local grocers. At age 8, he bought his first piece of real estate and then sold it at age 12, doubling his original investment.

While a student at the University of Kentucky, Gatton began his career in the automobile industry as a sales associate at L.R. Cooke Chevrolet in Lexington.  After receiving his MBA, he opened one of the first Volkswagen dealerships in Kentucky. Eventually, he owned a total of nine automobile dealerships in Tennessee, Alabama and Texas.

Gatton has also made investments in banking. In 1981, he formed Area Bancshares of Owensboro, which grew to become the largest bank holding company headquartered in Kentucky, owning 17 banks with 65 branch offices across the state. Area Bancshares had $3 billion in assets when he sold it to BB&T in 2002.

Gatton has likewise been involved in major real estate ventures in multiple states including the Beaumont development in Lexington.

In 1985, Gatton formed his own charitable foundation, and since that time, has made many philanthropic gifts.

Gatton also has given significantly to the Carol Martin Gatton Academy of Mathematics and Science, located on the campus of Western Kentucky University and named “America’s Number One Public High School” by Newsweek magazine. He made the lead gift to the Bill Gatton College of Pharmacy at East Tennessee State University, and he has made substantial gifts to several other educational institutions, as well as numerous gifts to other worthy causes.

Gatton has likewise made gifts to more than 2,300 public school teachers in eastern Tennessee and western Virginia to purchase educational supplies for their students.

“Bill Gatton, as he has done throughout his life, is helping young people achieve their dreams for higher education," Capilouto said. "We are deeply grateful for his partnership with us and his visionary generosity, which will have a significant impact on our students and their educational pursuits for generations to come.”