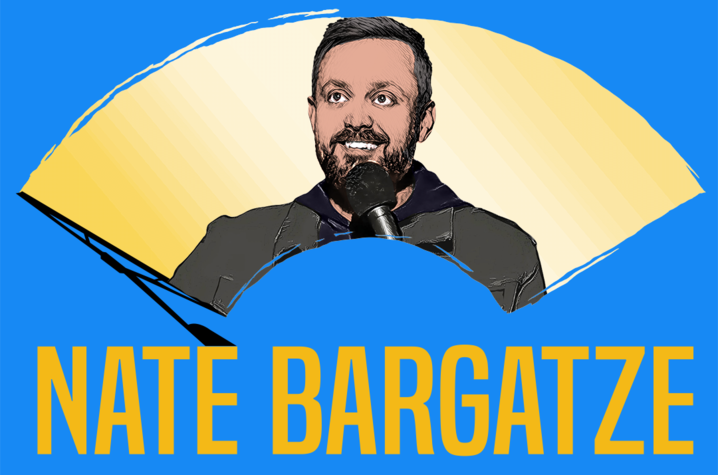 Nate Bargatze's "The Raincheck Tour" will make a stop at Singletary Center Jan. 13, 2022.

LEXINGTON, Ky. (Nov. 4, 2021) — The University of Kentucky Singletary Center for the Arts will kick off the new year in comedic style as Outback Presents brings stand-up comedian Nate Bargatze to campus 7 p.m. Thursday, Jan. 13, 2022. Tickets go on sale 10 a.m. Friday, Nov. 5, at www.SingletaryCenter.com and at the venue box office.

Hailing from Old Hickory, Tennessee, stand-up comedian Nate Bargatze is selling out shows across the world on his "Raincheck Tour." Bargatze followed in the showbiz footsteps of his dad, a former clown turned world class magician, whose influence is seen on Bargatze’s 2015 debut special "Full Time Magic" and his debut album "Yelled at By a Clown." In March 2019, Bargatze's first solo one-hour Netflix special, "The Tennessee Kid," premiered globally with rave reviews, and he recently released his highly anticipated second special for the streaming platform, "The Greatest Average American," on March 18, 2021.

Bargatze’s comedy is both clean and relatable, evident in his 10 appearances on "The Tonight Show Starring Jimmy Fallon." He also appeared on "Conan" four times, was a recurring guest on "@midnight," and had his own "Comedy Central Presents" in 2011. Off-screen, Bargatze was part of Jimmy Fallon's "Clean-Cut Comedy Tour," and has done live shows for the troops in Iraq and Kuwait five times. In addition to touring the country as a headliner, Bargatze toured in arenas with Chris Rock on his 2017 "Total Blackout Tour." He regularly performs at Bonnaroo, SXSW, Oddball Comedy Festival, Sasquatch, Clusterfest and the JFL Montreal Comedy Festival, where he’s received critical acclaim multiple years in a row.