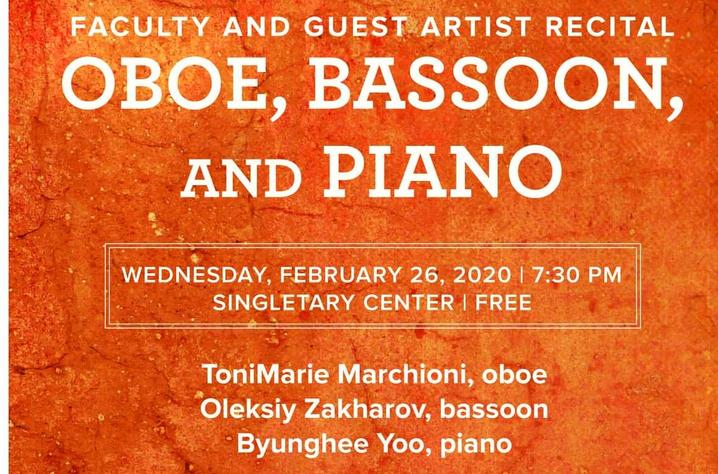 LEXINGTON, Ky. (Feb. 24, 2020) — The University of Kentucky will welcome renowned musical guest artists Oleksiy Zakharov and Byunghee Yoo, who will join the university’s own ToniMarie Marchioni, in a program of works for the oboe, bassoon and piano. The recital will begin 7:30 p.m. Wednesday, Feb. 26, at the Singletary Center for the Arts Recital Hall. The recital is free and open to the public.

While freelance performing and teaching, Zakharov has built a career in New York City, New York. Originally from Ukraine, Zakharov’s credentials include receiving a master's degree from The Julliard School and a bachelor's degree from Oberlin Conservatory, as well as a post-graduate diploma in orchestral performance from Manhattan School of Music. He has previously held positions of acting associate principal bassoon of the Los Angeles Philharmonic and second bassoon of Indianapolis Symphony Orchestra from 2009 to 2015. Zakharov is a bassoon technician and specialist, and typically spends his free time servicing, restoring and repairing instruments on the East Coast.

Oboist ToniMarie Marchioni has a diverse career as a performer, educator, arts advocate and administrator. Named a UK faculty member in 2013, Marchioni is an assistant professor at the UK School of Music and a frequent lecturer/performer at International Double Reed Society conferences. A native of Mechanicsburg, Pennsylvania, she holds a bachelor’s degree from Harvard University, and master’s and doctoral degrees from Juilliard. She has appeared as a guest musician for a variety of ensembles, including the Philadelphia Orchestra, the Cincinnati Symphony, Nashville Symphony, and the National Symphony Orchestra, where she acted as second oboe for the 2017-18 season.

Pianist Byunghee Yoo is a visiting assistant professor of music in chamber and collaborative music at the Indiana University Jacobs School of Music. Yoo came to the U.S. from South Korea after she received her bachelor’s and master’s degrees in music from Kyungwon University. She also went on to obtain a master's degree in collaborative piano from Julliard before earning her Doctor of Musical Arts from the University of Texas at Austin, where she studied with Anne Epperson. Yoo has been invited to perform with the concertmaster of the St. Louis Symphony, David Halen, as well as judge for the Missouri Music Teachers Association Competition and Texas A&M University-Kingsville Piano Competition.