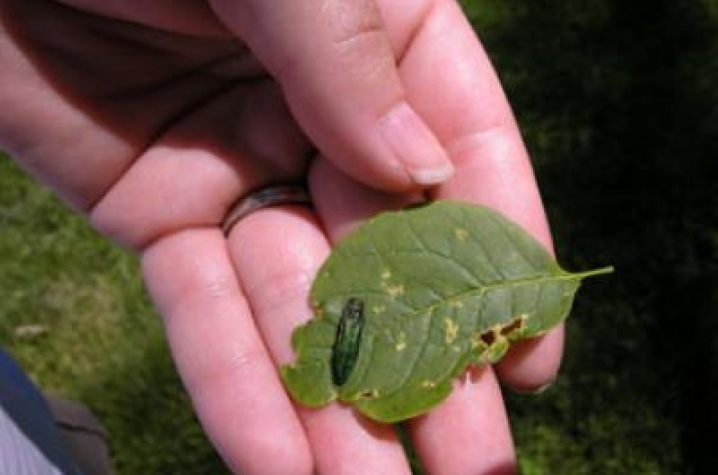 LEXINGTON, Ky. (May 23, 2014) — The fight continues, but the invader has the upper hand. Kentucky’s ash trees, important as timber producers and landscape trees, have faced the onslaught of the emerald ash borer, an invasive insect pest from Asia, since 2009.

Since then, a county-level quarantine has been in effect to slow the borer’s spread through human activity. The original quarantine included 20 counties, all within the Lexington-Louisville-Cincinnati triangle. Based on new detections of the insects on survey traps, at least one new county was added to the quarantine each year, including some in Eastern Kentucky. The quarantine issued by the Kentucky Office of the State Entomologist in conjunction with the Kentucky Department of Agriculture and the University of Kentucky Department of Entomology forbad the transportation of all hardwood species of firewood, ash trees, lumber, nursery stock or other material from the quarantined counties without a certificate or limited permit.

Unfortunately, the emerald ash borer spreads naturally by flying. Despite local quarantines, expansion of its range continues. In response, the entire state was placed under quarantine in April. The decision is designed to regulate the interstate movement of ash nursery stock, green lumber, waste, compost, chips and firewood and effectively lifts the county quarantines.

“While it is quite likely that the insect is present outside the original quarantined counties, our entire state is not infested at this time. At this point, emerald ash borer activity is still very localized in some areas,” said Lee Townsend, extension entomology professor in the UK College of Agriculture, Food and Environment.

The quarantine of the entire state means that ash materials may move from Kentucky to surrounding states that are also wholly quarantined for the emerald ash borer, including Missouri, Ohio, Virginia and West Virginia. Special permits are required to move articles into Illinois and Indiana, however.

Though the movement is no longer forbidden within Kentucky’s borders, the state entomologist’s office and the Kentucky Division of Forestry strongly urge Kentuckians not to transport firewood outside of the local area. Transporting firewood has been proven to spread invasive insects.

“With the new emerald ash borer quarantine rules, firewood can be moved from one place to another within Kentucky,” said Larry Lowe of the Kentucky Division of Forestry. “However, it is important to realize that there are other pests that can also be moved in firewood, and the use of local firewood can help reduce risk of infestation of insects other than the emerald ash borer.”

Ash trees, with their light but exceptionally strong wood, are an important component of Kentucky’s forest industries. Ash occurs throughout the state, representing approximately 7 percent of the total timber volume. However, certain regions of the state, such as Northern Kentucky and south central Kentucky, have significant amounts of ash.

“The loss of the trees is affecting Kentucky’s woodlands, our forest industry and homeowners and cities that have widely planted ash,” said Jeff Stringer, UK extension professor of silviculture.

Until this year, the Kentucky Office of the State Entomologist hung purple traps to monitor the spread of the small, dark-green metallic beetle that feeds on all ash tree species. Though the traps have been one of the best tools for monitoring the spread of the insect, they have only been marginally effective, said Joe Collins, UK senior nursery inspector.

“We will continue to partner with the USDA to release biological control wasps in Kentucky,” Collins said.

To date, three species of stingless wasps have been released at 12 sites in the state. Extremely small, the wasps are not capable of stinging humans, but are very good at tracking down emerald ash borer larvae under tree bark. Homing in on the vibrations the larvae make when chewing, the wasps can insert their stingers through the bark and, depending on the wasp species, lay an egg either on or inside the larvae. When the eggs hatch, the wasp larvae consume the ash borer larvae.

Homeowners and woodland owners living in or within 15 miles of the 31 formerly quarantined counties who wish to protect their ash trees should start or continue to apply protective treatments.

“At this point, it is not clear how long landscape ash trees must be protected as the wave of EAB infestation passes through, but seven to 10 years is a reasonable estimate,” Townsend said.

He does advise homeowners, however, to save their money and not begin preventive treatments until an active infestation is found nearby. The state urges anyone who suspects an infestation — the EAB leaves D-shaped exit holes in the bark — to contact the Office of the State Entomologist, 859-257-5838, or their local Cooperative Extension office for confirmation.

More information about the emerald ash borer in Kentucky and a list of affected counties, are available at http://pest.ca.uky.edu/EXT/EAB/welcomeeab.html.