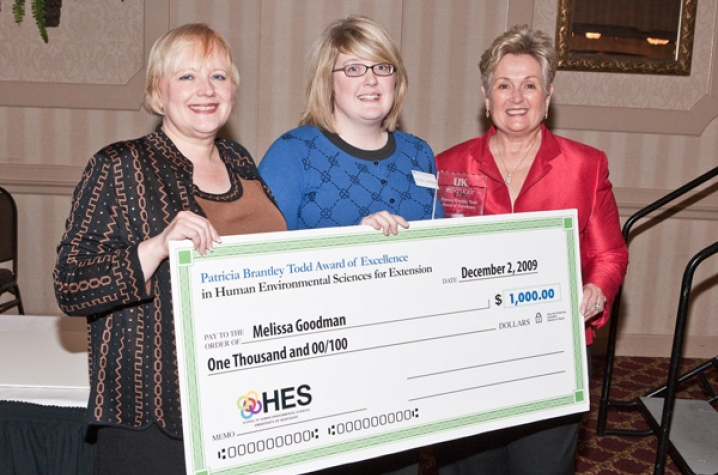 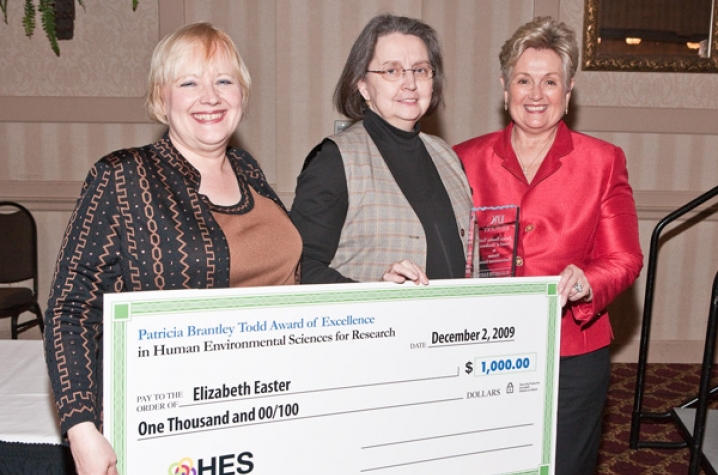 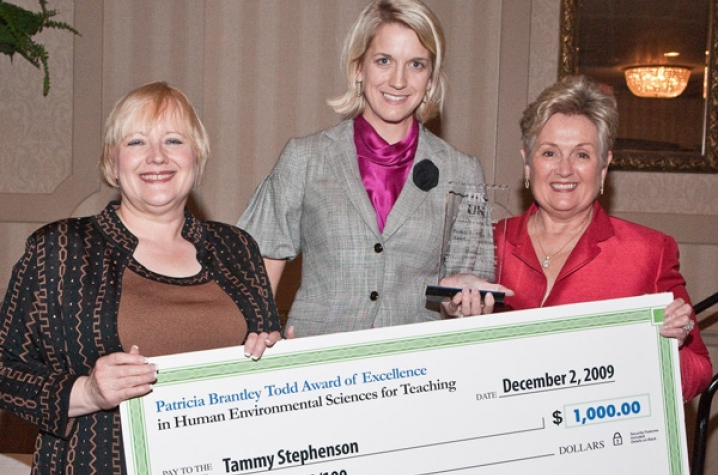 LEXINGTON, Ky. (Jan. 20, 2010) - The first-ever Patricia Brantley Todd Awards of Excellence in Human Environmental Sciences (HES) recently were announced by the school, which is housed within the University of Kentucky's College of Agriculture.

One recipient was honored in each of three categories:

•             Extension - Melissa Goodman, Family and Consumer Sciences agent in Hickman County. Goodman was honored for her heroic efforts on behalf of the citizens of Hickman County, located in far southwest corner of Kentucky, during the ice storm of January 2009.

•             Research - Elizabeth Easter, faculty member in the Department of Merchandising, Apparel, and Textiles (MAT). Easter, who has taught at UK for more than 20 years, established the nationally renowned Textile Testing Laboratory in MAT.

•             Teaching - Tammy Stephenson, faculty member in the Department of Nutrition and Food Science. Stephenson teaches a large number of courses and a wide range of students, from freshmen to graduate students, consistently receiving outstanding evaluations.

Each of the recipients received a plaque and a check for $1,000.

The awards are named in honor of UK School of HES alumna Patricia Brantley Todd, known to most people as UK First Lady Patsy Todd.

Mrs. Todd, together with her husband, Lee T. Todd Jr., UK's 11th president, had been looking for a way to give back to the school in gratitude for the excellent educational experience she enjoyed as an undergraduate. Following discussions with Ann Vail, professor and director of the School of Human Environmental Sciences, it was decided that the establishment of a fund that would be used to recognize and reward excellence would be appropriate.

"Over time, even though she was reluctant, I was able to convince Mrs. Todd to allow us to name the award in her honor and in tribute to the excellence she has strived for on behalf of the University of Kentucky," Vail said.

At the presentation of the Patricia Brantley Todd Awards for Excellence, the Kentucky Extension Association for Family and Consumer Sciences granted honorary membership to Lee Todd in recognition of his long-standing support of family and consumer sciences extension and its initiatives to strenghthen individuals, families, and communities across the Commonwealth.