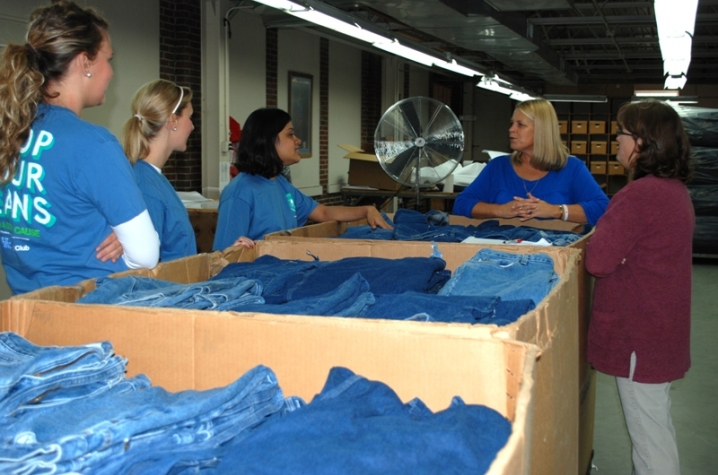 LEXINGTON, Ky., (Dec. 1, 2010) – Members of the University of Kentucky’s Merchandising, Apparel and Textiles Club collected 11,273 pairs of jeans during the club’s annual denim drive. Collected jeans are recycled and converted into natural cotton fiber insulation to use in Habitat for Humanity homes. Many of these homes are built in areas ravaged by natural disasters, including New Orleans.

This is the third year for the club, which is a part of the UK School of Human Environmental Sciences in the College of Agriculture, to host the drive. It is part of a larger campaign organized by Cotton, Incorporated, an organization funded by U.S. cotton growers and importers.

This year’s total exceeds the goal Meredith Cinnamon, club president, set for the organization at the beginning of the drive and is well over the 6,000 pairs collected in 2009. The amount the club collected is enough to furnish insulation for 22 homes.

“We wanted to do something to give back to the community and give our club a greater purpose,” Cinnamon said. “Plus, the drive is related to the fashion and textile industry, so it wrapped a lot of things into one.”

Club members set up donation bins from Sept. 13 to Nov. 10 across UK’s campus in areas heavily traveled by students, including dorms, lecture halls and cafeterias. One member even took bins back to her former elementary and middle schools in Boone County.

Elizabeth Easter, supervisor of the drive and professor in UK’s Department of Merchandising, Apparel and Textiles, initially helped the club get involved with the project.

“It provides students with the opportunity to get involved in a sustainability project that contributes to the worldwide community,” she said. “It helps them recognize sustainable practices as well as the value of community service.”