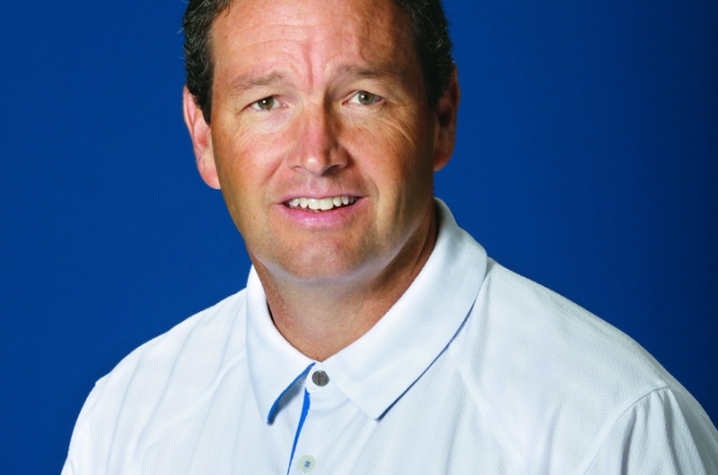 ORLANDO, Fla. (June 18, 2015) — University of Kentucky Director of Athletics Mitch Barnhart was presented with the Under Armour Athletics Director of the Year Award Wednesday, June 17, at the National Association of Collegiate Directors of Athletics (NACDA) annual awards luncheon in Orlando, Florida.

Barnhart was one of four ADs of the Year honored at the event, along with Chris Del Conte of Texas Christian University, Warde Manuel of Connecticut and Ian McCaw of Baylor.

“Under the steady and successful leadership of Mitch Barnhart, the University of Kentucky athletics program is reaching extraordinary levels of success across its 22 varsity programs,” said UK President Eli Capilouto. “For 13 years, his integrity and talent have empowered our staff, coaches and student-athletes to succeed on the field, in the classroom and across the communities they serve. Having recently reached his ambitious set of goals for the department, Mitch continues to inspire our program to reach even higher, while supporting in creative and impactful ways the academic mission of the University.”

The NACDA recognition comes the same year that UK Athletics completed the final goal set as part of Barnhart's ambitious 15 by 15 by 15 Plan.

The Southeastern Conference Tournament championship won by the men's basketball team gave UK its 15th conference or national title since the plan was announced in 2008. In the 2013-14 school year, UK finished 11th in NACDA Directors' Cup standings, meeting Barnhart's aim to make Kentucky a top-15 athletics department nationally. UK also has reached the academic prong of 15 by 15 by 15 in five consecutive semesters by achieving a department-wide grade-point average of 3.0 or better. In addition, UK Athletics met the final component by expanding the department's community service in Lexington and beyond.

“I’m thankful for the presidents I’ve worked for, Dr. Capilouto and Dr. (Lee) Todd at Kentucky and Dr. (Paul) Risser at Oregon State, and for Coach Dickey (former Tennessee athletics director Doug Dickey), who was an important mentor to me,” Barnhart said. “It is a great honor to be recognized by your peers. Success is driven by a wonderful staff, dynamic coaches and talented young people.”

UK Athletics has enjoyed comprehensive growth since Barnhart’s arrival in 2002. Eighteen of UK's 22 varsity teams contributed to the 2014 school-record Directors' Cup finish, with seven finishing in the top 10 of their respective sports.

Barnhart has helped pave the way for UK's ascendance as an athletics department by innovatively pursuing facility improvements. In September, UK will play the grand-opening game in the new Commonwealth Stadium following a $120 million project made possible by an unprecedented partnership with its university partner. The football program also will have a new $45 million practice facility in 2016, adding to a list of new facilities completed in the last two years that includes new softball and soccer stadiums, a new track stadium and a new golf complex.

Barnhart is steadfast in his commitment to putting student-athletes first, evidenced by their strong academic performances. He is active in community service and encourages student-athletes to follow suit. Putting that into action, UK student-athletes combined to serve 4,319 hours in the community during the 2013-14 school year. Also, over the last four years, UK football players have made educational/service trips to Ethiopia, a program that has been expanded to include athletes from multiple sports.

Even with the department's growth and the increasingly competitive nature of college sports, UK Athletics has remained fully self-sufficient, operating with a balanced budget and with the help of no state or university funds under Barnhart's leadership. As further proof of UK Athletics' financial stewardship, Barnhart directs a $1.7 million annual contribution to the university's scholarship program and UK Athletics is funding nearly two-thirds of the $100 million Academic Science Building under construction on campus. All totaled, UK Athletics has directly and indirectly contributed nearly $200 million to the university's mission since 2002.

Barnhart is also a leader in shaping the future of college sports on a national level. He was appointed to serve on the NCAA Division I Council, a body charged with conducting the day-to-day business of Division I athletics, after becoming the chair of the NCAA Basketball Issues Committee in 2010.

Barnhart, Del Conte, Manuel and McCaw are among 28 athletics directors who were honored at the NACDA event. Four winners in each category were chosen in the NCAA Football Subdivision; NCAA Division I-AAA, Division II and Division III; NAIA; and junior/community colleges.

“Since 1998, NACDA has been highlighting the notable contributions made by athletics directors across all divisions of our membership,” said Bob Vecchione, NACDA executive director. “These 28 winners have been recognized by their peers for their outstanding work on campus, in their community and supporting their student-athletes.”

Among the criteria for selection were service as an AD for a minimum of five years; demonstration of commitment to higher education and student-athletes; continuous teamwork, loyalty and excellence; and the ability to inspire individuals or groups to high levels of accomplishments. Additionally, each AD’s institution must have passed a compliance check through its appropriate governing body. Selection committees comprising current and former directors of athletics, present and past NCAA and NAIA presidents, current and former commissioners and other key athletics administrators voted on nominees for the awards.

Barnhart is the second Kentucky AD to be selected, as C.M. Newton was chosen in 1999, the inaugural year for the honor.