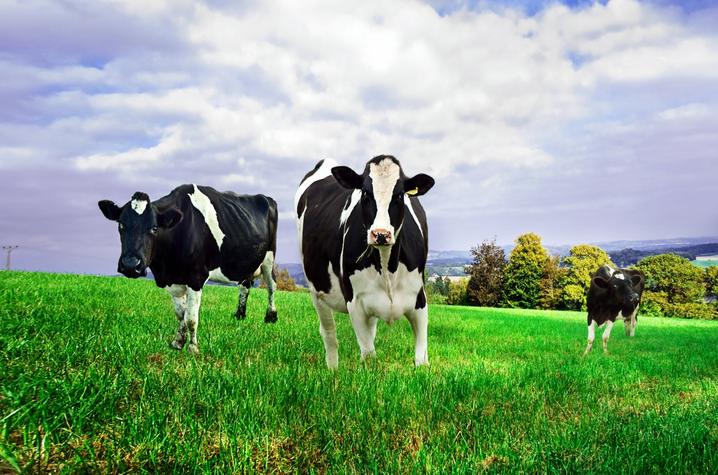 LEXINGTON, Ky., (April 12, 2017) — At the 2017 Celebration of Land Grant Research, the University of Kentucky College of Agriculture, Food and Environment took a moment to focus on current issues in land-grant research and recognize award-winning researchers.

The celebration featured keynote speaker Jack Britt, scientist, teacher consultant and entrepreneur, in its inaugural Futures Lecture. Britt delivered a presentation titled, “Dairying in Kentucky and the USA in 2067,” in the Cameron Williams Lecture Hall in the UK Plant Sciences Building. The Futures Lecture series aims to help people envision the future of food, society and agriculture.

Britt is a Kentucky native, having grown up on a dairy farm in Warren County. He earned a bachelor’s degree in agriculture and biology from Western Kentucky University and a doctoral degree in physiology and biochemistry from North Carolina State University (NCSU). His career includes appointments at Michigan State University, NCSU and the University of Tennessee system.

After the keynote, the celebration continued with recognition of the winners of the 2016 Bobby Pass Excellence in Grantsmanship Award, Research/Extension Impact Award and the Prestigious Research Paper Award.

The Bobby Pass Excellence in Grantsmanship award is given in memory of former UK Department of Entomology hair Bobby Pass. The 2016 recipient is Surendranath Suman, associate professor in the Department of Animal and Food Sciences. The award recognizes his success in attracting competitive federal funding for his research related to meat quality. Most notably, Suman has served as principal investigator or co-principal investigator for five competitive grants from the U.S. Department of Agriculture’s National Institute of Food and Agriculture over the past 5 years.

The Research/Extension Impact Award is given to faculty in the college whose research program has resulted in a fully developed Cooperative Extension program. The 2017 recipient is Roy Burris, Department of Animal and Food Sciences faculty member located at the UK Research and Education Center in Princeton. The award recognizes his research and extension program regarding the use of soybean hulls as a supplement for grazing beef cattle, turning what was once a byproduct into a valuable feed.

The Prestigious Research Paper Award is given to faculty in the college based on research papers published between 2008 and 2016. The 2016 recipient is Peter Nagy, professor in the UK Department of Plant Pathology. The award recognizes his paper titled, “RNA virus replication depends on enrichment of phosphatidylethanolamine at replication sites in subcellular membranes,” published in the Proceedings of the National Academy of Sciences. Nagy’s published research revealed new insights on RNA viral replication, which has implications for diseases of both plants and humans.