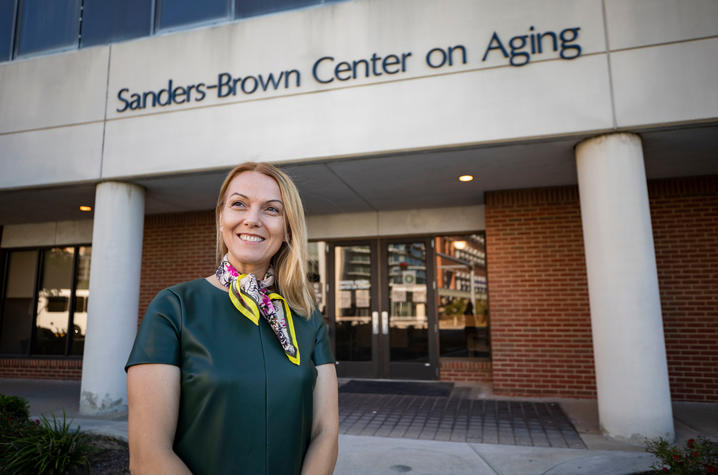 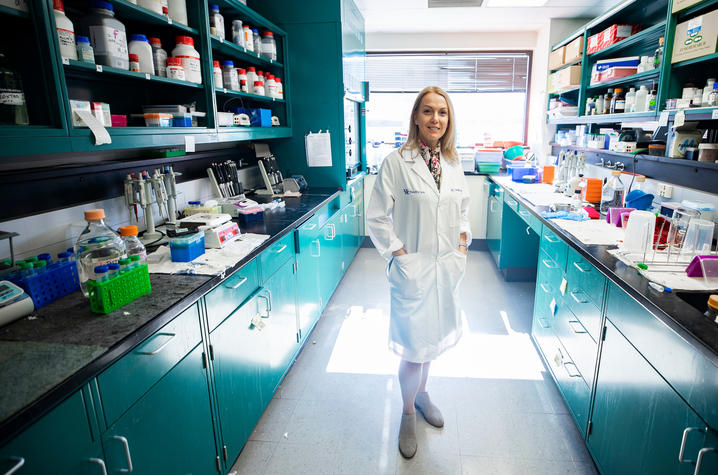 LEXINGTON, Ky. (Sept. 23, 2020) – Recent work published by researchers at the University of Kentucky’s Sanders-Brown Center on Aging (SBCoA) highlights what the lead investigator calls the “cornerstone” of her lab. Maj-Linda Selenica, assistant professor at SBCoA, led the study recently published in BBA Molecular Basis of Disease. She says their approach was unconventional as it looked at the molecular mechanisms implicated in TDP-43 biology, which is the focus of her lab.

TDP-43 is a DNA/RNA binding protein that has been found to be the hallmark pathology in a wide range of neurodegenerative diseases. Selenica says their study is the first to provide a novel pathway and identify potential therapeutic targets for TDP-43 proteinopathies – especially in Alzheimer’s disease and the newly characterized form of dementia known as LATE.

The new pathway discovered by Selenica and her team is known as Eukaryotic Translation Initiation Factor 5A (eIF5A). “Our study showed that eIF5A hypusination (a modification of the protein) governs TDP-43 accumulation and aggregation in the cytoplasm, as well as accumulation of TDP-43 in membranless organelles in the cytoplasm which are called stress granules. More importantly, pharmacological inhibition of an enzyme generating hypusinated eIF5A significantly reduced TDP-43 cytoplasmic accumulation and aggregation in the cells.”

Selenica says there are many important takeaways from this particular study including that this work has just scratched the surface of understanding the mechanism of hypusinated eIF5A in TDP-43 pathology. “Our understanding of TDP-43 function has advanced profoundly in the past several years; however, its complete role and the molecular mechanisms that lead to disease are not fully understood.”

A lot of recent work regarding TDP-43 has been the result of the work of some of Selenica’s colleagues at SBCoA, making this study important not only for Selenica’s lab in particular but for the combined effort at SBCoA to find a cure. Dr. Pete Nelson, senior pathologist at SBCoA, and his team recently identified TDP-43 as the defining feature of LATE (limbic predominant age-related TDP-43 encephalopathy), which mimics the clinical presentation of Alzheimer’s disease but has its own distinct pathology. Additionally, Erin Abner Ph.D., an associate professor at UK’s SBCoA and College of Public Health investigated the impact of co-morbid quadruple misfolded proteins (Aβ, tau, α-synuclein, and TDP-43). That study revealed that the prevalence of TDP-43 proteinopathy with AD pathology (tau and Aβ), correlated with increased early cognitive decline and severity of AD progression.

Altogether these pivotal findings signify the importance of TDP-43 in dementia, and especially Alzheimer’s disease and LATE. “Identifying new pathways implicated in TDP-43 pathology are extremely attractive as there are very limited therapeutic strategies for TDP-43 pathology – and there is no cure,” said Selenica.

Her lab has now moved into investigating their newly discovered pathway in animal models. Ultimately, they are aiming to develop therapeutic strategies and the utilization of hypusinated eIF5A as a fluid biomarker.