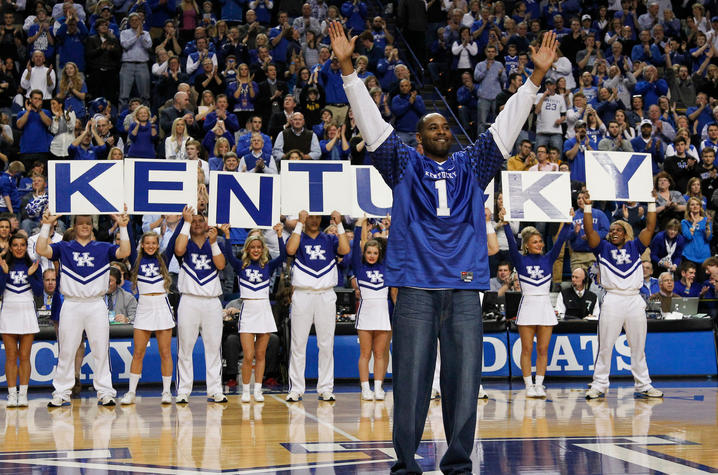 The talk will take place at 4 p.m., Thursday, March 24, in the Lewis Honors College Scholars Lounge, and is open to the UK community. Registration is required.

Anderson, a native of Louisville, grew up in unimaginable circumstances. Abandoned by his parents at the age of 10, he sought shelter sleeping in empty apartment buildings, old school buses and even his high school gymnasium. He became a single parent at age 15, worked two jobs, but remained focused and graduated as class president with a 3.7 GPA. Anderson credits his ability to not only survive but to succeed in spite of the circumstances of his life to a mindset he adopted that winning was a choice he could make.

Anderson went on to earn a full basketball scholarship to The Ohio State University, and then transfer to the University of Kentucky, where he helped win an NCAA Championship in 1996. The next year, Anderson was drafted as the 13th pick in the 1997 NBA draft and became the first player signed to the Michael Jordan Brand, and was given his own signature shoe.

With his first check from the NBA, he started his own company, DA Enterprises, and then established The Derek Anderson Foundation in 1998. The foundation supplies resources for abused and battered women and children who are without guidance, and reintroduces young men into the workforce. In 2015, Anderson founded the Stamina Foundation. The mission of the Stamina Foundation is to empower youth and young adults with the resources and life skills they need to follow their dreams.

In 2006, Anderson won a World Title with the Miami Heat, earning himself a spot on the shortlist of players to win both NCAA and NBA championships. After an 11-year NBA career, he retired in 2008.  After retirement, he expanded his business and opened two hotels in Turks & Caicos, his own film studio, Loyalty Media Group, and began writing books and screenplays. In 2010, Anderson produced and directed the documentary "The Untouchables of Kentucky." In 2020, Anderson returned to UK to complete his degree in liberal studies.

After being estranged from his parents for more than 24 years, Anderson went to find them both. After finding his father, he lost him 10 months later to a battle with cancer. That same year, he found his mother, who was suffering from addiction. He assisted her in her recovery, and years later, they had their first Christmas dinner together in over 28 years. These life events inspired him to write his autobiography and screenplay entitled, “Stamina.”

Anderson travels the world sharing his life lessons and encouraging people to maintain hope and persistence through challenging moments in life. He hopes his story and his mindset will resonate with all students during his talk at the Lewis Honors College.

"I look forward to sharing my journey that has always been deeply rooted in persistence, dedication and having the courage to never give up; which is something I like to call Stamina,” Anderson said.  “My hope is that I leave the Lewis Honors students knowing that success is not gained by happenstance, but rather by consistent practice in excellence. As Will Durant once said, ‘…we are what we repeatedly do. Excellence, then, is not an act but a habit.’”

For more information on the event, visit https://www.uky.edu/honors/anderson.