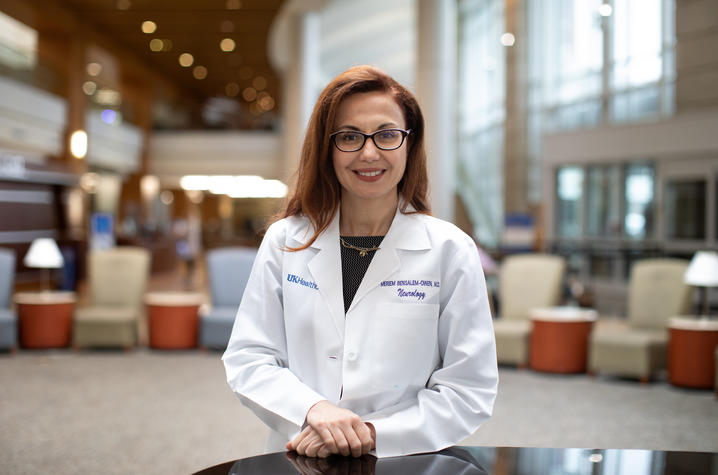 Dr. Meriem K. Bensalem-Owen is a professor of neurology and the director of UK HealthCare’s Epilepsy Program on October 26, 2020. Photo by Mark Cornelison | UKphoto

LEXINGTON, Ky. (Nov. 4, 2020) –  In America, 3.5 million people have epilepsy. Approximately one in 26 people in the United States will develop epilepsy at some point in their lifetime. In Kentucky, more than 2% of the population is living with this neurologic condition characterized by unpredictable seizures.

Epilepsy has numerous physical and emotional costs. Patients can experience problems keeping up in school or at work, depression and/or social isolation, physical injury during a seizure, and can even die from a seizure. They may not be allowed to drive, play sports, or have other restrictions that impact their professional or personal lives.

Despite the development of several new anti-seizure medications or anti-epileptic drugs over the past couple of decades, approximately 30-40% of epilepsy patients remain refractory – or resistant – to medical treatment.

Vivian Albrektsen falls into that category. The 42-year-old, who is legally blind, was having up to 25 seizures in one day and had taken more than 10 different medications. Her seizure focus could not be clearly localized and she was not amenable to resective epilepsy surgery. Vivian would experience brief “honeymoon periods” after trying a new medication.

“What happens with me is I’ll get a good seizure medication," she said. "It will work for maybe six months and then my brain talks to itself and says you know this has been working … we need to try something else.”

Vivian has been seeing Dr. Meriem Bensalem-Owen, director of UK HealthCare’s Epilepsy Program, for almost a decade after receiving her epilepsy diagnosis. In 2018, Bensalem-Owen and her team were thrilled when the Food and Drug Administration approved the utilization of Deep Brain Stimulation (DBS) devices as a treatment for epilepsy – giving them a new option to provide some hope for patients like Vivian.

DBS implantation requires two surgeries: one to implant the generator and a second to implant leads that go from the chest and neck into the brain. The location of where the leads are implanted is how Bensalem-Owen says DBS for epilepsy differs from DBS used for other disorders. The goal of DBS for epilepsy is to disrupt certain electrical activity in the brain to control seizures. Over time, neuromodulation can be achieved. This means DBS therapy is designed to change (modulate) how brain cells work by giving electrical stimulation to brain areas involved in the patient’s seizures.

“Brain cells are all the time misfiring and firing. When the firing becomes synchronized it can cause seizures. This device disrupts that synchrony or harmony,” said Bensalem-Owen. When telling patients about the treatment she uses, she compares it to the conductor of an orchestra. “We disrupt the conductor with small electrical impulses so the right directions cannot be given to the whole orchestra.”

Dr. van Horne successfully implanted one of Dr. Bensalem-Owen’s patients with the first DBS device in Kentucky shortly after getting FDA approval. Since then six others have received a DBS implant at UK HealthCare, including Vivian. This represents the highest number of epilepsy patients implanted with this device in Kentucky.

The combination of medication and DBS allowed Vivian to go several months seizure-free.

“Before the DBS it was like a revolving door every several months of changing medications. I was getting tired of it,” said Vivian. She credits Dr. Bensalem-Owen and UK HealthCare with saving her life.

Bensalem-Owen says seeing a patient go several months without a seizure is not consistently observed with DBS. She says those that qualify for this type of treatment are the most difficult to get seizures under control with medications and who cannot have removal of the part of the brain that causes seizures to happen.

“Sometimes we don’t achieve seizure freedom despite our best efforts," she said. "The goal then is to really attempt to improve the quality of life and the seizure burden.”

Working with patients like Vivian - who have endured years of changes in medications, surgeries, and side effects - to find the right treatment plan isn’t always easy, but it is a job that Bensalem-Owen and her team take great pride in.

“We are here to support our patients, some of them are very complex," she said. "Some of them are difficult not just for the type of their epilepsy but because of co-existing medical conditions and difficult social situations. They don’t get to choose how they are. My colleagues and I like the challenge and we are here to help everyone with difficult to control epilepsy.”

Bensalem-Owen says so far what they are seeing in the seven DBS device recipients at UK is promising.

“Overall, we see an improvement in frequency, severity and recovery from the seizures,” she said, noting that being the first in the state to successfully implant an epilepsy patient and also a leader in Kentucky is a great honor. “We had these patients just waiting for something to happen with new medication options, or we tried epilepsy surgery and it failed or they weren’t eligible. So, then it was like what do we do now? We would just wait for the next thing to come up. For us, this is an addition to our toolbox. We are thrilled to have it because we want to do all we can to help our patients have a better quality of life, and to not live in fear of injuries or death from seizures.”

DBS treatment can only be done in an accredited National Association of Epilepsy Centers (NAEC)Level 4 epilepsy centers. UK HealthCare Kentucky Neuroscience Institute is proud to maintain a Level 4 NAEC Accreditation – the highest rating by the National Association of Epilepsy Centers. UK HealthCare is the only Level 4 epilepsy center in the greater Lexington area.