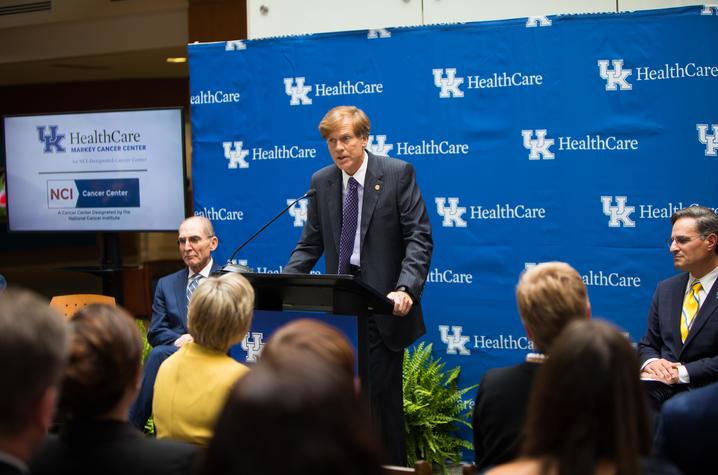 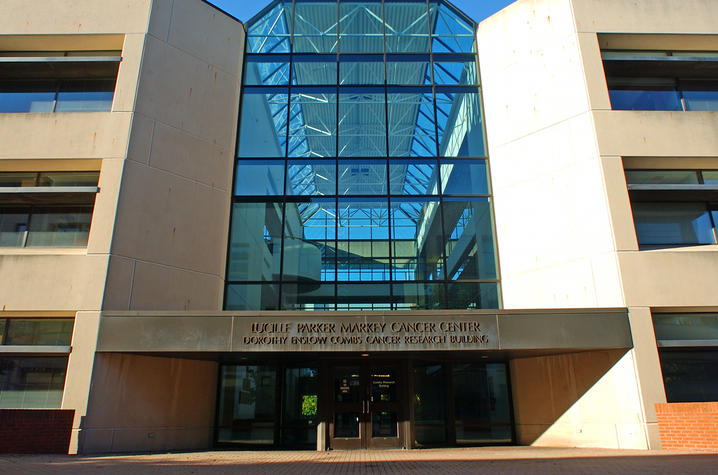 LEXINGTON, Ky. (Aug. 10, 2018) — The University of Kentucky Markey Cancer Center announced Friday that the National Cancer Institute (NCI) renewed its national cancer center designation for the next five years. The UK Markey Cancer Center remains one of only 70 NCI-designated centers in the country and the only one in Kentucky.

“UK was founded for the people of Kentucky, and still today, they turn to us. Five years ago, we stood together and declared cancer in Kentucky had a new foe. That is a promise we intend to keep, and we are proud to announce further investment in that promise with the renewal of the Markey Cancer Center’s NCI-designation,” said UK President Eli Capilouto. “The renewal of this transformative designation will enable us to further deliver on our promise to those we serve and heal – to be a champion against the disease that for too long has robbed Kentuckians of happiness and health.”

“At a time when cancer incidence and mortality are at their highest levels ever, it is critical that the people of this Commonwealth have access to a NCI-designated cancer center, and we have the state’s only such center right here in Central Kentucky,” said U.S. Congressman Andy Barr. “Continued NCI grant funding will have a significant economic impact on our region in attracting top candidates for cutting edge jobs to further our collective research mission. I was proud to lead a congressional delegation letter in support of the Markey Cancer Center’s NCI designation and I commend the UK researchers, medical staff and university officials who are committed to supporting advancements in critical research fields.”

"Earning NCI designation five years ago was both a recognition of our efforts up to that point, and a catalyst to do even more research, outreach, and clinical care for Kentucky and beyond," said Markey Cancer Center Director Dr. Mark Evers. "With Kentucky still home to the highest cancer incidence and mortality rates in the nation, having access to the research-driven, high-acuity care an NCI-designated center offers is vital to our citizens. With this renewal, we will continue to push forward new efforts in cancer prevention, research and treatment options with the ultimate goal of conquering cancer in the Commonwealth."

In September 2017, Markey submitted a 1,300-page application seeking NCI designation renewal, highlighting its accomplishments over the past five years and detailing its plans for cancer care and research for the next five. Earlier this year, the NCI sent a dozen reviewers to Markey for a site visit to appraise the center’s work and plans. The renewal came with an improved overall score for Markey and a higher amount of projected funding from the NCI compared to the previous award.

“The renewal of Markey’s NCI-designation as a research-oriented Center has broad impact on UK research, as the programs within the grant touch all aspects of research from undergraduates, to graduate students, and from basic to transdisciplinary and community-engaged research,” said Lisa Cassis, UK vice president for research. “We understand that it is critical that we use the power and breadth of research to reduce the burden of cancer in the Commonwealth, and have designated cancer as a research priority at UK. Growth in cancer research as a result of the renewal of the NCI-designation moves us closer to our common goal of decreasing cancer in Kentucky.”

“Being designated as a National Cancer Institute cancer center is important to all of us in that it is a result of much work, dedication and excellence in cancer care,” said Dr. Mark Newman, UK executive vice president for health affairs. “However, this designation has even greater significance to patients across Kentucky and beyond who benefit from the extraordinary care provided by world-class physicians and patient care providers as well as the research and preventive care opportunities.”

Markey's clinical and research work is backed by the university, the Commonwealth of Kentucky, and philanthropy through the Markey Cancer Foundation. In the past five years, $215 million in institutional, state and philanthropic funds has supported the recruitment of cancer researchers and clinician scientists and the construction and renovation of clinical and state-of-the-art research space specifically for the oncology research and clinical programs at UK.

“In a state with the worst cancer rates in the Union, the Markey Cancer Foundation is proud to support Dr. Evers and his team as they advance cancer care in every community across Kentucky and beyond,” said Markey Cancer Foundation Executive Committee member Farra Alford Sr. "Their drive, their vision and their focus, coupled with extraordinary philanthropy, has made Markey the place where Kentucky comes to beat cancer.”

National Cancer Institute designation grants are awarded for five-year periods. Markey will have the opportunity to renew its status and simultaneously apply for Comprehensive Cancer Center designation, the highest level of NCI designation, in 2022.