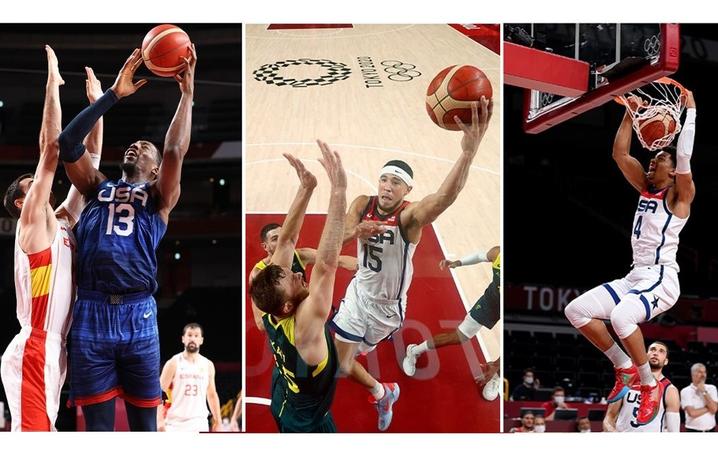 The UK trio, a quarter of the USA Basketball Team at the delayed 2020 Olympics, helped the Americans to their fourth consecutive gold medal with an 87-82 victory over France on Friday at Saitama Super Arena in Japan.

Kevin Durant led Team USA with a game-high 29 points. Adebayo played well in the final game with six points, six rebounds, four assists and a game-high three blocks. Booker, who had scored 20 points in the semifinal win vs. Australia two days ago, was limited vs. France offensively but played solid defense. Johnson did not see any action.

A foul-riddled first half saw the Americans lead by five and Team USA pulled in front by as much as 71-57 late in the third quarter.

France, as it did every time it looked like the U.S. was going to pull away, fought back and got as close as 73-70 midway through the fourth quarter and 85-82 with less than 10 seconds to play. Durant iced the game with a pair of free throws for the final score.

UK's three representatives on the 2020 U.S. Olympic Team were more than any other college.

As a department, current and former UK Athletics athletes have now tallied nine medals at the 2020 Olympiad, including six gold medals. Counting Lee Kiefer and Gerek Meinhardt, who are both in the UK College Medicine, current and former University of Kentucky students have totaled 11 medals.

It was not an easy journey to the gold medal game for USA Basketball. In addition to losing to France in the group stage, the Americans also dropped a pair of exhibition games prior to leaving for Japan. But Team USA, led by Durant, found its footing after the loss to France and didn't panic when trailing in the quarterfinals and semifinals.

USA Basketball has medaled in each of the 19 Olympics it has participated in, winning 16 gold medals, one silver and two bronze medals. Team USA owns a 143-6 overall win-loss record. Since NBA players began representing the U.S. in 1992, Team USA is 58-4 in its eighth Olympics appearance with seven gold medals.

With the additions of Adebayo, Booker and Johnson to the elite club, 14 Wildcats have won Olympic gold medals. However, this season marks the first time two or more UK players have won gold on the same Olympic team since the Fabulous Five of Cliff Barker, Ralph Beard, Alex Groza, Wallace Jones and Kenny Rollins in 1948.

Booker, coming off the first NBA Finals appearance of his career, averaged 9.3 points per game for Team USA and shot 42.2% from the floor.

Adebayo tallied 6.3 points and a team-best 5.7 rebounds per game as a starter. He also tied for the team high with seven blocks.

Johnson was a late addition to the roster after impressing on the USA Select Team. He appeared in four of six games.

Just a week before the Olympics run, Booker led the Phoenix Suns to their first NBA Finals appearance since 1993. A two-time NBA All-Star and one of the game's best scorers since debuting in the 2015-16 season, Booker guided Phoenix to a 51-21 record in the regular season and the second seed in the difficult Western Conference. He averaged 25.6 points, 4.2 rebounds and 4.3 assists per game in the regular season. It was the fourth straight year he has averaged at least 24.0 points per game. In the NBA Playoffs, he averaged 27.3 points, 5.6 rebounds and 4.5 assists per game, including a 40-point triple-double in game one of the NBA Western Conference finals.

Booker is nearing 10,000 career points. Just 24 years old, his current point total is the seventh most ever by a player before turning 25.

Booker was the Southeastern Conference Sixth Man of the Year during UK's magical 2014-15 season. He averaged 10.0 points, 2.0 rebounds and 1.1 assists per game, while also sinking 58 3-pointers. Booker won four straight SEC Freshman of the Week honors and earned a league-high five overall awards. He was drafted 13th overall by the Suns in 2015. With Booker playing an instrumental role, the Wildcats went 38-1 in his lone season, winning the first 38 games before falling in the Final Four. The 38 victories are tied for the most in NCAA history.

Adebayo, a 2020 NBA All-Star, led the Miami Heat back to the playoffs for a second consecutive season after appearing in the 2020 NBA Finals.

After helping anchor a defense this season that allowed just 10.4 fast-break points and only 41.3 points in the paint per game, both the lowest in the NBA, Adebayo finished fourth in the NBA Defensive Player of the Year voting and was named to the NBA All-Defensive Second Team for a second straight year.

Adebayo was a key part of the 2017 Elite Eight and SEC championship team at Kentucky. In his lone season at UK, he averaged 13.0 points, 8.0 rebounds and 1.5 rebounds with eight double-doubles. Adebayo was tabbed to the All-SEC Second Team by both the media and the league's coaches. He was also an All-SEC Freshman Team selection and a member of the SEC All-Tournament Team after helping lead UK to the crown. He was selected 14th overall by the Heat in 2017.

After biding his time in San Antonio in his rookie season, Johnson has emerged as one of the faces of the proud San Antonio franchise. He averaged 12.8 points and 6.0 rebounds per game last season and became the first Spur with at least 20 points and at least 20 rebounds in the same game since Tim Duncan in 2013.

Johnson became the third-youngest and fifth-fastest Spur to reach 1,000 career points. He also made the Rising Stars Challenge game this past season.

Johnson was named the 2019 SEC Freshman of the Year during his lone season at Kentucky and made the All-SEC Second Team. He played a key part on the 2019 Elite Eight Team, averaging 13.5 points and 5.9 rebounds per game. The Spurs selected Johnson with the 29th overall pick in the 2019 NBA Draft.

Kentucky has enjoyed unprecedented success at putting players in the professional ranks under John Calipari. In 12 seasons with John Calipari at the helm, UK has churned out three No. 1 selections, 32 first-rounders, 21 lottery picks and 43 total players in the NBA Draft. The 43 draft picks are 15 more than the next closest school (Duke). The 32 first-rounders are more than the entire Big Ten (29) combined in that timeframe.

With Isaiah Jackson's selection in the opening round this year, Kentucky has now had at least one player taken in the opening round in each of the last 12 drafts under Calipari. That's the longest streak in the modern draft era (since 1966). Calipari's streak is 14 straight dating back to his time at Memphis.

Of the 70 players who have finished their college careers at UK under Calipari, 43 have been selected in the NBA Draft, a 61.4% success rate. Another five of those made the NBA, and the majority of the rest were walk-ons. Those numbers do not include the late Terrence Clarke.

Calipari's players have entered the league NBA-ready. His players have garnered 23 All-Star selections, with Anthony Davis winning the game's MVP honor in 2017. Derrick Rose was named NBA MVP in 2011. Six of his players have been tabbed All-NBA, three have been named NBA Rookie of the Year, and 15 players from Calipari's first 11 teams at Kentucky have made the NBA All-Rookie teams.

Using figures compiled by basketball-reference.com and spotrac.com, Calipari-coached players only (which includes Rose but not Rajon Rondo) have amassed more $3 billion in career NBA contracts.