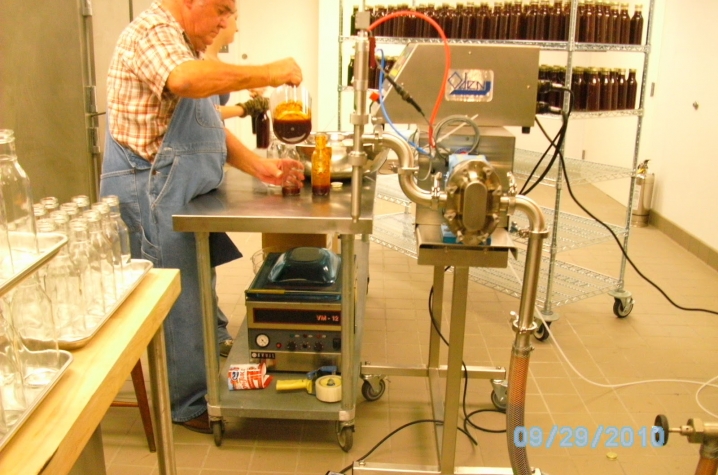 ANNVILLE, Ky., (Aug. 1, 2011) — Sometimes the overhead required to develop and produce value-added products on the farm is just too much for already financially strapped farmers. A new venture in Eastern Kentucky is trying to reduce that burden and make it easier for farmers to get their products into consumers’ hands.

The Jackson County Regional Food Center in Annville has been in the works for almost a decade, and now it’s open and ready for farmers and entrepreneurs in Kentucky and beyond.

“As the agricultural diversification part of Phase I (tobacco settlement) came along, we found there was a need for some infrastructure so that farmers could add value to their product,” said Jeff Henderson, the county’s University of Kentucky Cooperative Extension agent for agriculture and natural resources. “Eight years later, here we are with a regional food center where people can mass-produce their products.”

Appalachian Alternative Agriculture for Jackson County members wanted to take the overhead out of the equation for farmers wanting to create value-added products.

“There are farmers out there who have great recipes, but they can’t afford that $8,000 or $10,000 steam kettle (they need) or they aren’t able to build a $25,000 kitchen,” he said. “So we put something in place they can rent to develop their product at an hourly rate to make it more affordable.”

Henderson said the center is much more than a commercial kitchen. Clients can bring their recipe, get help developing it into a saleable product, get advice on packaging and labeling and produce as many as 2,000 to 3,000 units per day. “We’re trying to help farmers funnel more money into the farm,” said Greg Golden, manager at the center. “Farmers bring (produce) to the farmers market, and what they don’t sell, they can bring to the kitchen to process into a value-added product.”

Golden said clients can bring the recipe and ingredients to the center and make it themselves or pay center employees to do the work for them.  “It’s a win-win situation for people in this county,” he said. “We’ve had people making strawberry jams, jellies, barbecue sauces, marinades, hot sauces, relishes and more.”

Farmers then turn around and add those value-added products to their weekly farmers market offerings and sell them in other venues.

The center is also creating much-needed jobs in Jackson County. In addition to Golden, the center employs a few part-time workers to help with production. But Henderson said the center is really helping create many home-based businesses in the region and other locations.

Another benefit of the Jackson County Regional Food Center is a docking station for Kentucky State University’s Mobile Processing Unit which travels around the state to help farmers process their poultry and rabbits.  “There’s more and more interest in people having backyard (poultry flocks) for their own use,” Henderson said. “We’re thinking we’ll see that segment of the center grow.”

Henderson stressed that although the center is aimed at helping clients create a marketable product, there is room for home processors too.

“If someone wants to do their home canning here, we have special rates for that,” he said. “For example, someone could can 50 quarts of beans at a time. So, you can use the facility for things you want to use at home or you can do a commercial project. The center is there to serve both types of clients.”