February is American Heart Month. In this second installment of our two-part series, “Heart, Hope, Healing,” we take you through the incredible experience of UK HealthCare patient Andy Combs and his wife, Julie. In the first installment, Andy survived a massive heart attack due in part to the quick actions of his wife, Julie.

He emerged from a two-week coma with his mind intact; but the heart attack, ensuing complications and a long hospital stay took a significant toll on his body. The only way to save his heart was through a lengthy, complicated surgery, but he was too weak to undergo any kind of procedure.

“I didn’t know that after two weeks in a coma, you lose all kinds of muscle mass,” Andy said. “I didn’t have the strength to get out of bed or feed myself.”

Before his discharge from the hospital, Andy made small strides in his recovery. He could take short walks with a walker and eat regular food. He then spent two weeks at Cardinal Hill Rehabilitation Hospital in Lexington, working on building strength through physical and occupational therapy. With each passing day, Andy could stand longer and walk farther, progressing more and more until his body was strong enough for surgery.

“Cardiac surgery is a journey,” said Tessa London-Bounds, M.D., Andy’s cardiothoracic surgeon at UK HealthCare’s Gill Heart and Vascular Institute. “It’s not about doing the operation and sending them home. It’s about the pre-operative care, getting them medically optimized by working with the cardiologists and therapists before we even get them to the operating room.”

The blockages in Andy’s heart were in the left anterior descending artery, resulting in a heart attack known as the “widowmaker” – a type of cardiac event that only has about a 20% survival rate.

“I remember seeing Dr. London at UK, and that’s when I first found out I was going to have to have a bypass,” Andy said. “She said they wouldn’t know until they got in there, but they were looking at maybe seven or more bypasses. I didn’t know they even went that high.”

Two months after his cardiac arrest, coma and rehab, Andy underwent surgery that ultimately became a quintuple bypass. During a bypass, surgeons use blood vessels from other parts of the body to divert blood flow from the damaged and blocked arteries. Oxygenated blood can then flow through the heart to the rest of the body. The more bypasses needed, the longer and more complex the operation.

“Mr. Combs had a lot of blockages in the blood vessels that feed the muscles of his heart,” said London-Bounds. “His heart function was much lower than what it should have been, so he needed five bypasses. Sometimes extra bypasses are required to make sure that enough blood gets to the larger areas of the heart. And if we’re in there, we might as well do everything.”

“Dr. London just made me feel at ease about everything,” Andy said. “I felt very calm about the whole thing, both of us did. I’d already been through one miracle, and we know that whatever happens, it’s in God’s hands. So I just felt really comfortable with Dr. London and her whole staff.”

Following the surgery, London-Bounds visited Andy in his hospital room. He had been given a special heart-shaped pillow for his recovery, something to hold against his chest to lessen the pain when he coughed and sneezed. Printed on one side of the pillow is an anatomical heart.

“I asked Dr. London where the bypasses were,” Andy said. “So she took a Sharpie and drew where they were on the pillow. And she wrote a nice note on it. ‘You’re doing great, keep up the good work.’ I thought that was great.”

For London-Bounds, seeing patients like Andy come out of surgery with flying colors is one of the most rewarding parts of her job.

“You can see an outcome right after surgery,” she said. “It’s amazing to see the physiology start to change. We’ll have patients with certain conditions who say they feel like they’ve been suffocating, and they progressively get worse and worse and not be able to do anything they previously were able to do. And after surgery, even with the cut, the drains, the tubes and lines, you can already see a transformation starting and that’s pretty rewarding.”

Andy was discharged and continued work on his recovery. He dutifully attended his follow-up appointments with Vedant Gupta, M.D.,  and began cardiac rehab sessions.

He was feeling good – until one day he wasn’t.

“I got up one night and my whole side hurting like the dickens,” Andy said.

“He kept telling me he pulled a muscle,” Julie said.

“That’s what it felt like at first,” Andy said.

But Julie wasn’t convinced. She took Andy back to Frankfort Regional Medical Center (FRMC), where they got some surprising news.

“They determined I had a pulmonary embolism in both lungs,” Andy said.

Pulmonary embolisms are blood clots that result from when blood pools in the veins. They are a serious, but not uncommon, complication that can occur after surgery. Untreated, embolisms are deadly. Julie got Andy to the hospital in the nick of time.

The attending cardiologist that night at Frankfort Regional was Gbolahan Ogunbayo, M.D., a UK HealthCare interventional cardiologist who works exclusively at that hospital.

“Probably because he had been immobile for a significant amount of time, he ended up having blood clots travel to the arteries of his lungs,” Ogunbayo said. “One of the clots blocked the artery way down in his lung, resulting in some pretty significant pain.”

Ogunbayo contacted London-Bounds immediately. Close, fast communication with his UK colleagues is one of the benefits of Ogunbayo working locally at Frankfort Regional, a member of the UK Gill Heart & Vascular Affiliate Network.

“This comes with this partnership with UK,” Ogunbayo said. “I can call Dr. London on her personal cell and say hey, I have your patient here, this is what we’re going to do. He had an appointment with her a few days later, and we coordinated on medication and treatment. He continued his rehab and his journey to getting better.”

Andy continued his cardiac and occupational rehabilitation, first at Cardinal Hill, then later at Frankfort Regional, a facility that’s more convenient for him and Julie. Andy now works with Frankfort cardiac rehab specialist Marty Mireles, who takes him through a routine of aerobic exercise, balance training, strength training, flexibility, endurance, and more.

The goal of cardiac rehab, says Mireles, is to help clients like Andy return to their previously active lifestyles without fear. It also lowers the patient’s risk of experiencing another cardiac event in the future.

“Andy is very determined to achieve his goals and gain back his previous lifestyle,” Mireles said. “Both he and his family are committed to making lifestyle changes that will improve his success in achieving his goals.”

Andy continues to see Ogunbayo for his follow-up care, a relationship that goes beyond patient and doctor. He and Julie both consider Ogunbayo to be family.

When Julie’s mother was in the hospital, Ogunbayo stopped by to see how they were doing.

“Dr. O comes in and gives me a big hug, hugged Julie and her sisters,” Andy said. “He took time out of his day just to talk to us. Most doctors don’t do that.”

For Ogunbayo, the admiration is mutual. He believes Julie and her mother’s commitment to take action when Andy stopped breathing is the reason Andy is alive and well today.

“I can say for sure that if he didn’t get CPR by Julie and her mother, we probably would not be having this conversation at all,” Ogunbayo said. “I’m talking with the most knowledgeable of doctors at UK, saying, ’We don’t think he can make it.’ And we’re withdrawing care. For him to say ‘Hey guys, I’m still here,’ it’s pretty amazing. The story from where we’re pretty much thought he was a done deal to getting out of the hospital, going to rehab, coming back to get his chest cracked open and having the bypass, getting the blood clot and he’s still standing. I mean, it’s an extraordinary story when you look at it from beginning to end. And Julie played an integral role in making sure Andy is still with us. She saved his life.”

Andy is doing well in cardiac rehab and is ahead of his projected recovery schedule. Eight months after Julie found him unresponsive in his bed, the two are enjoying a quiet life in each other’s company. Like many Kentuckians, watching UK basketball is a favorite past-time for Andy – he’s a die-hard UK fan who has an entire room in the house dedicated to his Wildcat memorabilia.

“Everyone knows that you do not call this house if there’s a UK game on,” Julie said with a laugh.

On Saturday, the Combs’ were recognized on the floor of the UK vs. Alabama game alongside Gupta and London-Bounds. Andy has been especially excited about this year’s team, citing UK forward and rebounding machine Oscar Tshiebwe as his favorite player.

Aside from looking forward to UK’s championship potential during March Madness, the Combs’ say they just want to sit back, relax, and enjoy life.

“We want to enjoy the simple things, and not take things for granted,” Julie said.

“Walk the dogs, that kind of thing,” Andy said. “I’m just grateful to be alive, to be here and to hopefully spend the rest of my life with her. She’s the best thing that ever happened to me.”

Andy turns to Julie and smiles. They share a kiss. 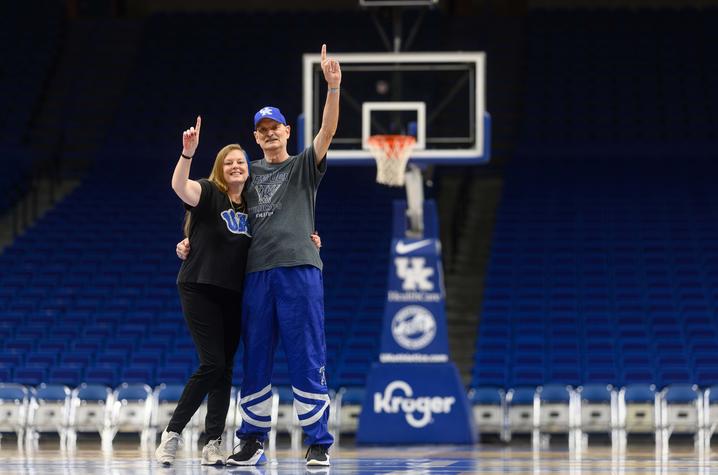 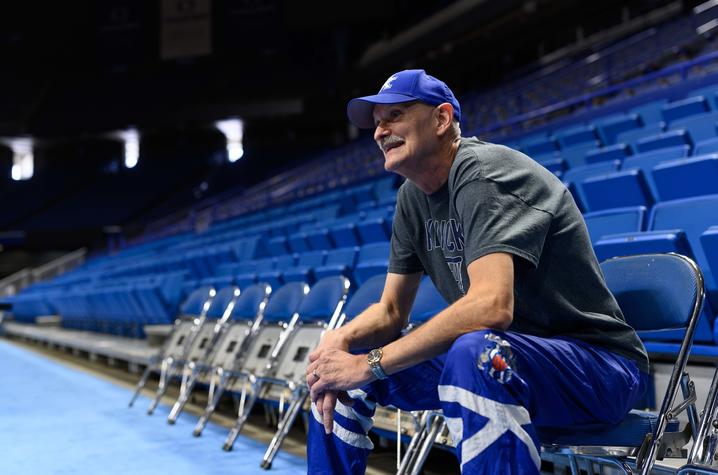 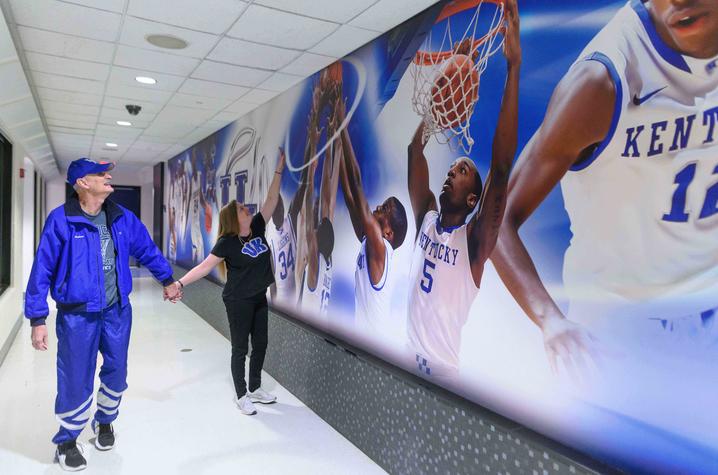 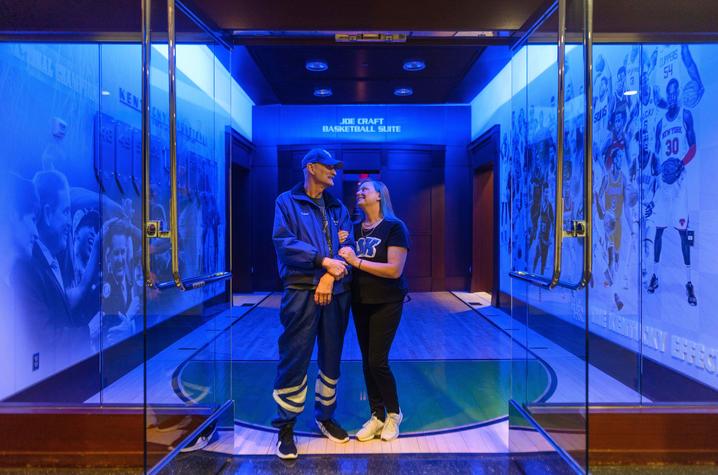 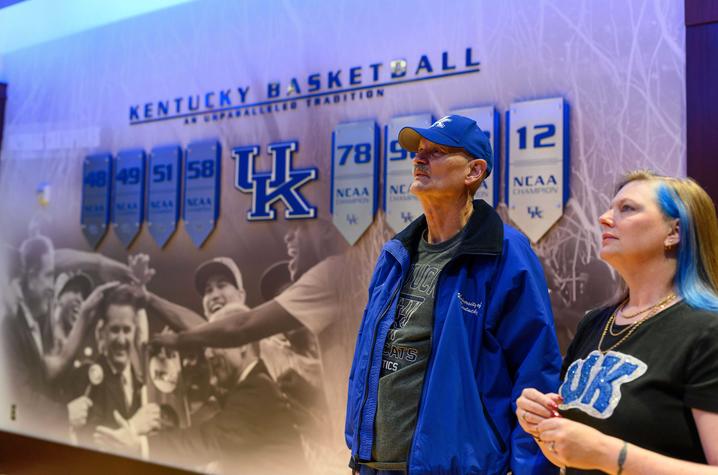 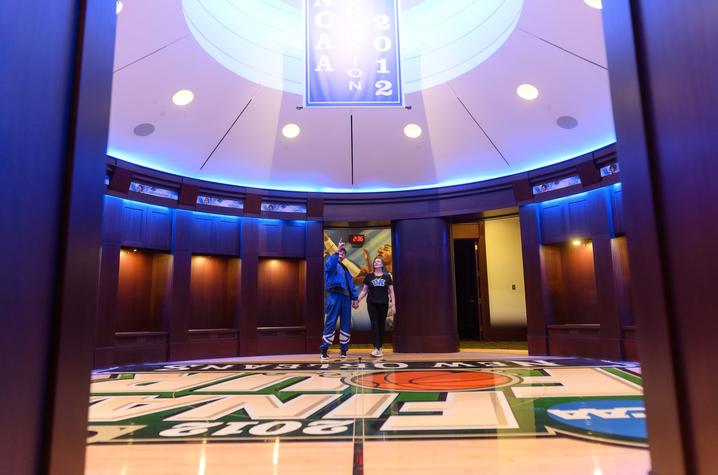 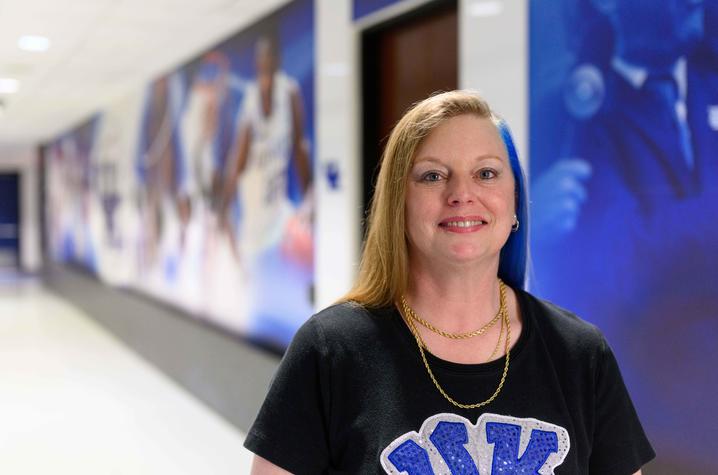 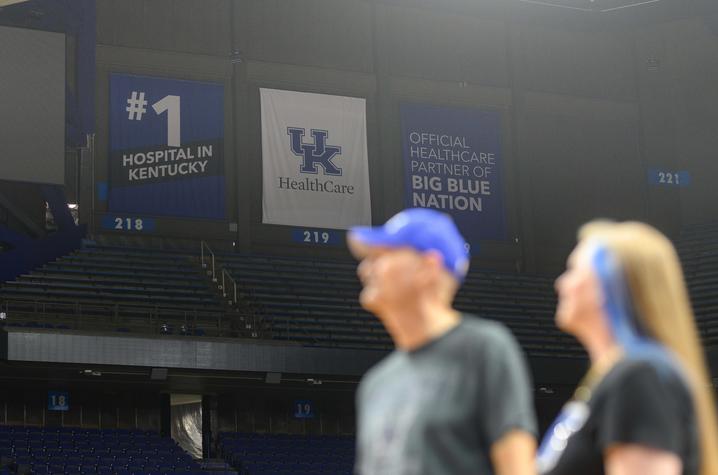 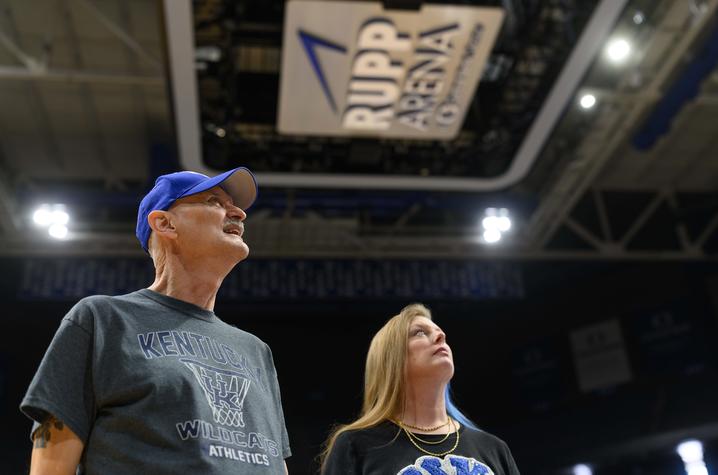 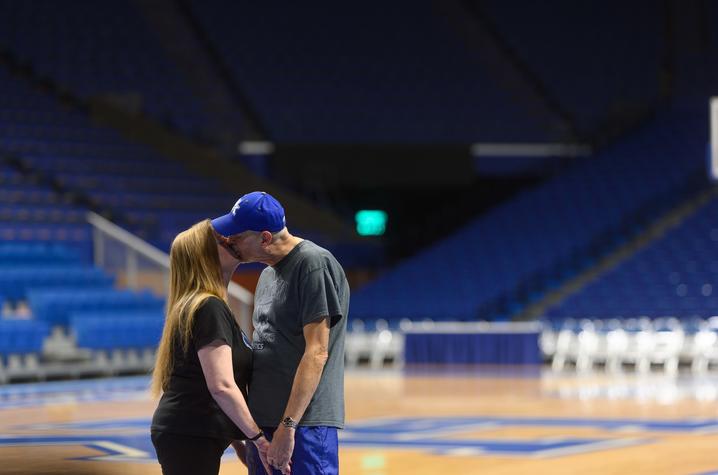